The Dishonesty and Abhorrent Behaviour of James White

As of late, James White, known for intellectual dishonesty:

and his hate tirade against Islam by promoting the beliefs of his friends who abuse and insult Muslims:

Has been tweeting me, which anyone can view here. Unfortunately, this article does not edify the great talents of such a person revered in Christian circles, what you are about to see are messages from a man who berates, degrades and spams others, while refusing to engage in honest and academic discourse. Our journey begins with James White when after being tagged in a few of my tweets, decided to discuss this tweet, which he sent me:

What is most surprising is that James White displayed to me some of the most ridiculous and disrespectful public decorum from any academic that I have ever been privy to. The tweets below are to be read bottom – up for chronological order, what one can see is that I replied to his tweet about the video and within 3 minutes, I was forced to respond to his change of topic, where he began to speak of an earlier tweet aligning him with his ally in bigotry, Sam Shamoun. 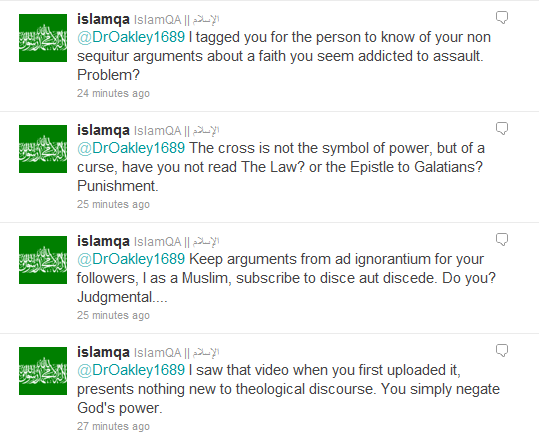 In fact, I am publicly apologizing on behalf of James White because of the intellectual suicide that he had to portray towards his followers. His zealot provoked response besides changing the topic to Sam Shamoun, was to quote for me, the verse in Greek which I was referring to in Galations. I find it abhorrent, that his response to my rebuttal of his video is to simply quote my reference. To put it into a layman’s perspective, let’s assume for a moment I send a video to James about apples. He says he disagrees, he prefers oranges, in response, I send him a picture of an apple. Me, sending him a picture of an apple neither forwards or benefits the discussion, but what it does and quite well, is to divert the topic at hand and thus giving him an option to say, “Yes I responded”. When in fact he hasn’t responded to the claim but merely created an excuse to digress.

I wonder what his response would have been, had I decided to simply reply to his messages with ayats from the Qur’aan? This is what we refer to as missionary self defense, instead of pursuing a discussion, the missionary defaults into “self preach mode”. Essentially, don’t expect a logical, rational or sincere response, their only goal at this point is to throw scripture in the hopes that it inspires you to accept their point of view. Clearly this didn’t work, so he decided to attack a straw man, by completely dropping the discussion and reverting to attacking me for associating him with Sam Shamoun’s aides:

From this tweet onwards, he refuses to respond to my continuing discussion on the video he sent me, I attempted many times to divert him from his emotional tirade, to no avail. Apparently he has a problem being associated with Sam Shamoun’s friends, even more so, to the extent he’s willing to abandon a discussion he started on the justice of God, which I did remind him of numerous times:

As you can see, I made it abundantly clear I wanted to finish our initial discussion on the link which he sent, however, this led him to spamming me again, leading to him arguing about his friendships. I really am disappointed in Christian academia, if James White that is, does indeed represent the best of Christian intellectualism. Not only was his behaviour petulant and disrespectful, he neglected to discuss the topic which he offered to engage me in and what was most shocking was his decision to talk about friends rather than God. I suppose he appeals to his own level of intellectualism, which from the discourse seems to be of the kindergarten level, playground chat, arguing about friends. If I wanted to fight about my friends, I would have gone to a friend, rather I like an adult decided to accept James’ challenge for an academic discourse and well he decided friends mattered more.

The next tweet he sends after me reminding him above (“Silliness? You tweeted a video, did you not? Asked me to discuss and instead you changed the topic to an unsavory tweet”), was that decided he didn’t want to continue talking about Jesus or about his friends. Rather he abandoned discussion all together:

In conclusion, I expected better from a man who holds himself in such high esteem, I disagree with his poor ethics and his later insults (shown below).

As a Muslim, I was personally quite elated to have experienced, the self prophesied, leading “Christian Apologetic” fleeing after two tweets about his erratic and inconsistent emotional tirades about friendships. It indeed did please me to see that while James White wants to talk about “friends” as young children do, I was more happy to see the response which was projected unto this website by what I suppose are his twitter followers. We’ve had a spike in traffic due to the twitter discussion, with many comments being posted on some of this site’s articles. I’d like to thank James White for demonstrating pseudo intellectualism, poor academic skills and horrendous public decorum, his actions only served to better the Islamic community and sad to say disparage his own character.