Speakers’ Corner is a designated section of Hyde Park in London, UK. Since 1866 Speakers’ Corner has been a place of public debate, dialogue and arguments galore. A great many historical figures have spoken at Speakers’ Corner including George Orwell, Karl Marx and Vladmir Lenin. Today the park is used by the public to engage in protest action and to exhibit the right to free speech in discussing matters related to faith, politics and more. For further historical information, please visit the Royal Park’s guide as well as the Speakers’ Corner Trust’s History page.

On Sundays various groups come to the park to engage in civil debates and dialogues. This often includes Muslims, Christians, Atheists, Sikhs and occasionally, Kemetians. Most folks usually come out to watch the debates and dialogues, as such, the Sunday Speakers’ Corner crowd usually begins to come in at around midday til 4 pm or 5 pm generally speaking. Muslim da’wah groups usually show up between Dhuhr Salaah (prayer) time and Maghrib Salaah (prayer time), these times change throughout the year so it’s always best to consult a prayer time chart for up to date timings. The nearest tube station is at Marble Arch: 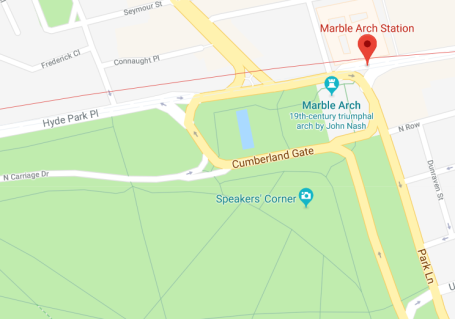 Can Anyone Show Up?

Literally anyone can show up and participate in the dialogues as Speakers’ Corner is a public place. It should be noted however that some people may not be necessarily comfortable with all of the shouting that usually happens. Due to many conversations happening at the same time and because there are large groups of people, shouting is usually done so the speakers can be heard. This is sometimes perceived as being aggressive but the purpose is to be heard, not to shout at anyone.

Showing up at the Corner does not mean that you have to participate, you can stand and watch without getting involved at all. Should you want to enter a conversation, it would be best to approach a speaker after they’ve finished a current discussion, as opposed to shouting at them from somewhere within the crowd. It should also be noted that there are a lot of YouTube camera crews that come to record the debates and dialogues. Some folks may be uncomfortable with being recorded but since Speakers’ Corner is a public place, being recorded is inevitable. However, a polite request asking not to be recorded by any cameraman would be appropriate in this case.