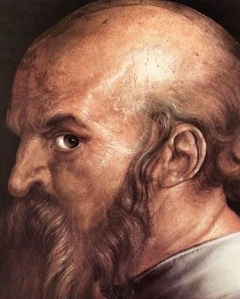 The Pauline Epistles and the narrative of Acts of the Apostles, present the vast majority of information that we have today on Paul of Tarsus (pictured above). Paul is essentially one of the greatest influences on early Christian theology, his struggles, his preaching, his conversion all constitute major plot elements of the early Christian narrative. I would like to begin this exposition by stating that this is not a simple and erratic attack on Paul. Rather, this is an examination of his statements as recorded in the New Testament, accompanied by commentaries from illustrious Christian exegetes. It is not my intention to hurt the sensitivities of our Christian brethren, but as a Muslim, it is my duty to examine the veracity of the Christian faith which claims to be the truth, above and beyond my own religion of Islam. With that in mind, let’s take a look at what we’ll be seeking to understand:

Recorded in the Second Epistle to Corinth, we read of an experience that Paul encounters:

Therefore, in order to keep me from becoming conceited, I was given a thorn in my flesh, a messenger of Satan, to torment me. Three times I pleaded with the Lord to take it away from me. But he said to me, “My grace is sufficient for you, for my power is made perfect in weakness. ” Therefore I will boast all the more gladly about my weaknesses, so that Christ’s power may rest on me. – 2 Corinthians 12:7-9.

If we were to read from the beginning of this Epistle, we would easily derive the understanding that Paul is being taught a lesson by God.  This is in doing so that Paul, can avoid becoming conceited through his own experiences, thus, God has put a ‘thorn in his side’ – a messenger of Satan. This however is not a position unique to Paul, according to the Old Testament, God has, and frequently does, send evil Spirits/ Messengers of Satan to his own people.

As the verse itself indicates, it is God who commanded the Messenger of Satan to become a ‘thorn in Paul’s side’. This presents a problem for the Christian faith, specifically because:

Paul is Afflicted by the Messenger of Satan:

According to the verse, Paul became tormented by this messenger of Satan:

“I was given a thorn in my flesh, a messenger of Satan, to torment me.”

In what exact way the messenger of Satan/ God tormented Paul, is up for much discussion. Various exegetes have derived polarising views on the exact meaning of what the torment could be, however, there are a few general views on this issue. Let’s first read Adam Clarke’s exegesis:

What this thorn in the flesh might be has given birth to a multitude of conjectures: Tertullian thought it dolor auriculae, the ear ache;Chrysostom, the head ache; Cyprian, carnis et corporismulta ac gravia tormenta, many and grievous bodily torments. I believe the apostle to refer simply to the distresses he had endured through the opposition he met with at Corinth; which were as painful and grievous to him as a thorn in his flesh, or his being bound to a stake;

Therefore we can deduce the torment as given to Paul by the Messenger of Satan as being:

However, we have a much more detailed and reference list of supposed ailments that could have been what the tormenting was, according to the Coffman Commentaries on the Old and New Testaments, he states:

Tertullian thought it was a headache.

Klausner believed it was epilepsy.

Chrysostom said it was “all the adversaries of the Word.

John Calvin made it “fleshly temptation.”

John Knox decided it was “infirmities of the mind.”

Macknight spoke of some who believed it was “the false teachers.”

Alexander was sure it was “Malta fever.” Etc., etc.

Therefore, the ailments can be summarised as such:

Whichever of these the case may be, the point is that Paul was most definitely indeed, emotionally at pain and suffering from some form of physical impediment, to the extent he could not bare it and called upon God to help him.

Epistles were Written Under the Influence of the Messenger of Satan:

According to verse 14 of the same chapter, Paul continues to preach while under the influence and torment of the Messenger of Satan/ God, the verse reads:

“Now I am ready to visit you for the third time”

In verse 20, Paul reaffirms that something is not right with him, something is amiss, so he tells the people at Corinth to not expect him to be normal upon his arrival:

“you may not find me as you want me to be”

Up to this point, Paul has not yet been able to remove the torment/ influence of the Messenger of Satan/ God upon him and he admits in Chapter 13 of the same Epistle that he continues to write while under the influence:

“This is why I write these things when I am absent, that when I come I may not have to be harsh in my use of authority—the authority the Lord gave me for building you up, not for tearing you down.”

Three times I pleaded with the Lord to take it away from me. But he said to me, “My grace is sufficient for you, for my power is made perfect in weakness. ”

Therefore, as the verse clearly demonstrates, the purpose of the messenger of Satan, was to teach Paul of Tarsus the true message of Christ’s grace.