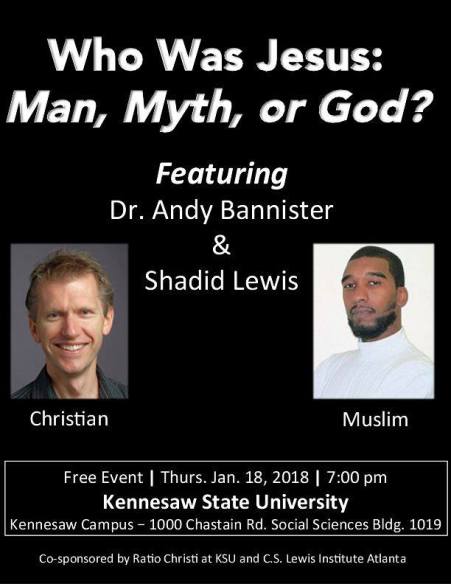 For further information, please see the Facebook event page as created by Ratio Christi. There is no information as of yet on whether or not there will be a livestream of the debate or the duration till the recording will be made public. As soon as any pertinent details are made aware to us, we’ll update this post and share the relevant information on our social media platforms.

The Bible says God was Imperfect, Ignorant and Disobedient

Theists tend to believe that God is perfect and without flaw, and this is a belief that many Christians share. The New Testament expresses this belief, it mentions:

“Be perfect, therefore, as your heavenly Father is perfect.” – Matthew 5:48.

It should be noted that this verse specifies that only one person of the three persons of the Trinity is perfect. I found this to be odd. Why doesn’t the verse say, “as the Son, Holy Spirit and Father are perfect?” Why does the verse only declare the Father to be perfect? Does this mean that the Son, is imperfect? As it turns out, it does mean that. The Bible explicitly teaches that the Son, who is a God, is imperfect and had to be made perfect, God had to become perfect. That’s quite a strange idea. How can God be flawed? When we read Hebrews 5:8-9, this is exactly what it teaches. The passages say:

Son though he was, he learned obedience from what he suffered and, once made perfect, he became the source of eternal salvation for all who obey him.

There are quite a few things we learn from this passage.

We should take note, that the passage begins with “Son though he was”, therefore qualifying that despite he is a God, these things happened. The author specifically uses this phrase to denote that the deity is being referred to, and that it is the deity of the Son which had to learn and become perfect. What is problematic is that according to the Trinitarian dogma, each person in the Godhead is co-equal. Therefore, if the Father is perfect, then the Son should be perfect too. Is an Afterlife Rationally Conceivable?

Posted on November 15, 2014 by Ijaz Ahmad Leave a comment

Viktor Frankl an Austrian neurologist and psychiatrist says in his book, A Man’s Search for Meaning:

After a while I proceeded to another question, this time addressing myself to the whole group. The question was whether an ape which was being used to develop poliomyelitis serum, and for this reason punctured again and again, would ever be able to grasp the meaning of its suffering. Unanimously, the group replied that of course it would not; with its limited intelligence, it could not enter into the world of man, i.e., the only world in which the meaning of its suffering would be understandable.

Then I pushed forward with the following question: “And what about man? Are you sure that the human world is a terminal point in the evolution of the cosmos? Is it not conceivable that there is still another dimension, a world beyond man’s world; a world in which the question of an ultimate meaning of human suffering would find an answer?”

Is it not cynical for man to think that he is the pinnacle of intelligent life? That the human world is an end point, the boundary of existence? Surely, if an ape can experience the world around them with all their senses and still be veiled from higher reasoning, can we too not conceive that perhaps we are also veiled?

Or, perhaps it is that some wish for this boundary to exist willingly at the cost of their own bravado….. 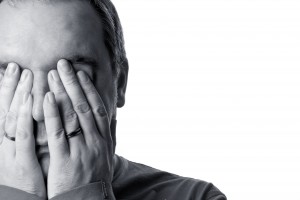 Pastor Isang Thinks his own God is Weak and Feeble

Not sure if he’s ever read the Old Testament, or he’s just trying to imply the Muslim God is weak because Muslims fight in God’s path, but Pastor Isang sure embarrassed himself and I took full advantage of it: 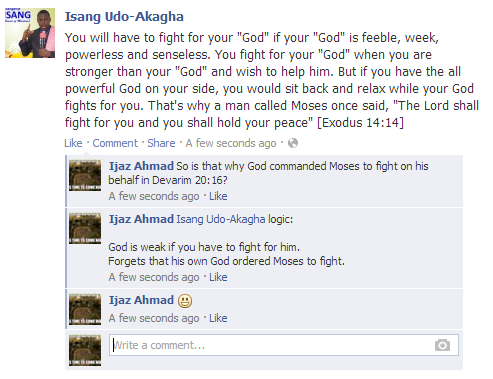 Missionaries, don’t you ever think before you post/ speak/ write?

Refutation: How can Jesus be God when he will be in eternal subjection?

Paul says in 1 Corinthians 15:28 that Christ will be subject to God forever:

When he has done this, then the Son himself will be made subject to him who put everything under him, so that God may be all in all.

In light of this eternal subjection how can any Christian believe that Jesus is God?

END_OF_DOCUMENT_TOKEN_TO_BE_REPLACED

Beautiful Dream – The Guidance of Allaah

This video was really touching, the intricacy of the medium involved in conveying the message in itself was extremely unusual which made the conclusion surprising! Indeed, a must watch for all and a great reminder!

In the Christian majority nation of South Sudan, which broke away from the Muslim Shari’ah enforced Sudan, child marriages have become a religious and cultural mainstay. Despite the misconception that Islam promotes child marriages, it is not in the Muslim Shari’ah ruled Sudan that such a case of this magnitude is prevalent, but in the Christian majority South. The Digital Journal reports:

A newly released Human Rights Watch (HRW) report, entitled “This Old Man Can Feed Us, You Will Marry Him:’ Child and Forced Marriage in South Sudan,” calls on the government of South Sudan to adopt measures to protect girls from child marriage.
In a country where at least 48 percent of young girls between 15 and 19 are married, with some marrying as young as 12, child marriage further widens gender gaps in school enrollment, contributes to rampant mortality rates and prevents girls from being free from violence.

The report’s information was collected through interviews with 87 girls and women in Central Equatoria, Western Equatoria, and Jonglei states, as well as with government officials, traditional leaders, health care workers, legal experts, teachers, the United Nations and non-governmental organizations.

I wonder how the Christians who praised the Christian South from breaking away from the ‘evil’ Muslim Sudan, will now justify and excuse almost 50% of all marriages being child marriages in the country which they so wholeheartedly support! Would David Wood, Robert Spence or Sham the Shamoun highlight this issue and try to combat ‘child marriages’ among their peoples, or is it only wrong when a report of a Muslim doing it makes news?