Posted on November 1, 2013 by Ijaz Ahmad Leave a comment

I seem to have pissed of Sam quite a lot, for every one comment I post in response to him, he goes on a rampage and posts 8 responses! That’s an 8 to 1 ratio of anger. Can you imagine, an adult man spending hours on the internet arguing with someone half his age, while sending 8 comments for every one comment response? If you think I’m exaggerating, here’s the evidence:

The guy just can’t control himself. I ask him one question and he engulfs himself in a rage fueled frenzy to the point that he just doesn’t stop writing and replying endlessly. Whether you are a fan of him or not, don’t you think that his reaction to a single question about his academic qualifications versus that of Dr. Ally’s is a tad bit too extreme? He could have simply said he was dishonest in his claim, admitted his wrong and moved on. Instead, he’s seemed to have unleashed all the frustrations, problems, issues he’s been having personally unto me. 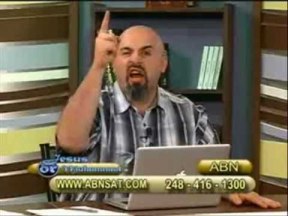 Psychologically speaking, as a peer counselor myself, Sam’s mental stability seems to hang on the fringes of human normalcy. In his case, his displaced anger is disproportionate to the events ongoing, which would imply that he’s projecting his frustrations upon an innocent individual (in psychology this is referred to as scapegoating, see: displaced anger). It’s common to see this problem with persons who have or are developing bouts of depression, in his case it could be from the fact that his apologetics career has ended and his only appearances are now on no named blogs. His disproportionate response also shows signs of multiple personality disorder, he created several user accounts to appear as if it was not him who wrote some other insulting comments about me. What this means is that Sam Shamoun’s mental health is very fragile, he’s unable to control his anger which has manifested itself into various streams of subconscious projection, whether that be through creating multiple user accounts in pretending to not be himself, or to writing excessive amounts of responses etc.

These are all hallmarks of an individual attempting to cope with the reality that is life, but unable to manifest himself into using normal control mechanisms. I, along with several Christians who have been victims of Sam’s projected and displaced anger – all call upon him to see a psychologist before he loses himself to dementia. It’s a sad reality to face, but our prayers are with Sam.