Posted on September 4, 2017 by Ijaz Ahmad Leave a comment

I came across this post on Facebook and immediately cringed because Sam Shamoun was demonstrating a psycho-social phenomenon that is quite easily identifiable. Let’s take a quick look at his post: 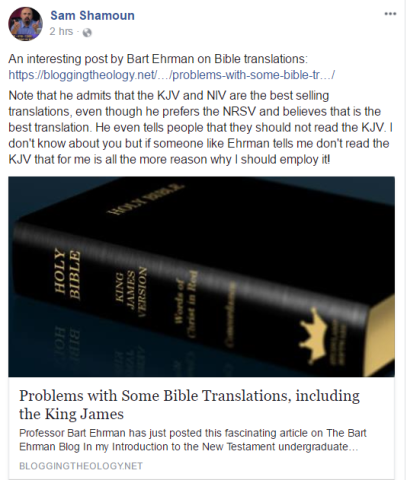 In psychology this is called reaction formation:

Reaction formation is a type of defense mechanism in which a person acts in the exact opposite manner to his own disturbing or socially unacceptable thoughts or emotions. This behavior is often unconscious and appears exaggerated, perhaps in an effort to overcompensate for the embarrassment, guilt or repulsion the person feels regarding his private thoughts.

By using reaction formation, one’s self-identity remains “safe” as the ego is kept in ignorance of the person’s true motives. For example, a highly religious man with lustful urges toward women might react with exaggerated disgust upon seeing a woman in revealing clothes, or he may go into long lectures about modesty. Or a woman who harbors racist feelings may go out of her way to be overly kind to people of another race. Or a man who fears that he is falling in love with his new girlfriend begins to pick fights and lash out at her in anger.

Behavior due to reaction formation is often extremely exaggerated, compulsive and inflexible. These behaviors don’t vary due to changes in emotion as do natural behaviors. For example, a father who feels guilt at resenting his child may go above and beyond to express showy love to the child under all circumstances. These behaviors based on fake emotions are often easy to spot. Therapists often observe reaction formation in patients who claim to strongly believe in something and become vehemently angry at everyone who disagrees.

Does the last line remind you of anyone?