Having been in the da’wah field for sometime, I found it difficult to be convinced of street da’wah. By street da’wah, I mean those folks that stand on street corners and hand out pamphlets and little books about Islam, sometimes books about Islam and Christianity. One of the things that made me dislike street da’wah was its emphasis on getting shahadahs (conversions). I always asked myself, would a person truly change their faith or accept a new one after a few minutes of conversation? I’m sure that there are people like this, but the vast majority are not. Yet, this issue has persisted in my mind, most of the people giving street da’wah are either themselves new Muslims or they know very little about Islam, much less so about Islam as it compares to other faiths. This form of popular da’wah became quite mainstream over the last decade or so. Videos of conversions on the street are some of the most popularly viewed Islam-related videos on the internet. This emphasis on getting new conversions truly bothered me. 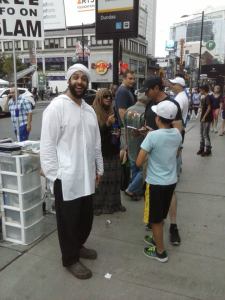 The emphasis more or less seemed to be on getting new conversions as often as possible, with the caveat of having the conversion recorded on video at the same time. Thus, one’s da’wah was only deemed successful if conversions were regularly taking place. Yet we need to ask, how many of those new converts (or reverts) have stayed in Islam? How many take the shahadah (testimony of faith) due to being pressured publicly, or due to that person simply being polite or easily manipulated? How could we know if these people had truly accepted Islam? Were there any follow ups? Did they have classes or sessions or ongoing support for the new converts? These questions honestly bothered me, and despite knowing many people in this area of da’wah, my doubts could not be mitigated. There was at least one group of young Muslims from my neighbourhood in Trinidad who did street da’wah and I spent a night or two with them. Their efforts did make me consider this form of da’wah differently, as I saw that their main interested was on education as opposed to bullying someone to change their religion. 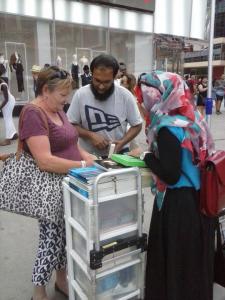 With these questions in mind, I had the pleasure of attending three sessions with Street Dawah Toronto. Something was different about this group, and I have to admit that it is these group of Muslims who need to be applauded for their hard work and dedication. In my time with them, I experienced things I never thought I would, had conversations that were meaningful and beneficial, while also having the opportunity to witness sincerity first hand. To begin with, what immediately stands out is the juxtaposition between the brothers and sisters of Street Dawah Toronto speaking calmly with pedestrians, while right next to them are a few different Christian missionary groups screaming and shouting about everyone’s damnation and their guarantees of going to hell. Of course, not all missionaries in Dundas Square behave this way, but of the few groups I observed over the weeks, there were at least two or more Christian groups preaching this way in the immediate vicinity of Street Dawah Toronto. It almost seemed to me as if passersby were actually drawn to the Muslims because of the missionaries shouting at them. 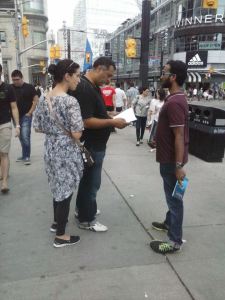 What also stood out about Street Dawah Toronto, was that they didn’t have any signs or posters putting down any group of people, or damning people to hell, as other groups in Dundas Square had. None of their literature was offensive or aggressive, neither confrontational. They neither shouted nor screamed, or put anyone down during conversation. No insults were hurled, no threats were made. They didn’t crowd around any one individual, they spoke person to person, thus putting pressure on no one to accept Islam. My questions were quickly being answered, my doubts put to rest. Not once, did I observe any of them trying to convert anyone, or push them to accept the shahadah. In almost every conversation they were eager to hand out resources in the form of free literature so that passersby could do their own research, come to their own conclusions, learn Islam at a pace they can without being pressured. I was quite elated to see this. Words could not express the joy I had seeing this same pattern of loving, caring, sincere behaviour occurring week after week.

Finally, there came a test. I watched one evening as a gentleman approached the da’wah stall and began to insult Islam. “This book (the Qur’an) was written by Satan, it’s from Satan!” he shouted as he approached a sister by herself. He then stood right next to the sister and shouted this statement at her a number of times while touching the literature on their da’wah stall. And that’s all it took. The sister didn’t even flinch, she didn’t shout in return, or insult the guy, or even call a brother over for help. She simply said, “okay sir,” and that was all. She was not angry, she did not retaliate, she did not become aggressive. What did she do after the man left? She continued to smile and hand pamphlets out. Not a sweat broken. That sister’s name? Tabasum. Her name literally means “smiling”. I was personally quite upset by the man’s aggressive behaviour, but on that day I witnessed with my eyes the Prophetic Sunnah of mercy. I witnessed the Prophetic Sunnah at work personified in the form of a smiling sister. That was the moment that almost brought me to tears. Hearing about the Prophetic Sunnah is one thing, but to witness it at work, being fulfilled by a sister in a tense situation truly showed me the beauty of Islam.

Yet, this was not unique to her. All the members of Street Dawah Toronto smiled incessantly, were pleasant and kind, warm and polite. Over the years I had seen these same faces every week giving da’wah, but seeing these guys at work is something else. Their humility cannot be emphasised enough. These folks have been using the very same da’wah stall that they originally started off with. It’s been about 6 years and it has remained the same. Just imagine that!  They didn’t change it to include a speaker or audio system, they didn’t change it to make the stall appear to be more flashy or “different”. They didn’t have to dress the stall up to appeal to anyone, because it was there enacting of the Prophetic Sunnah that drew people to them. I witnessed with my own eyes, both Muslims and non-Muslims gladly approaching them and looking with keen interest at the literature they had on display. I witnessed agnostics from Turkey, apostates from Iran, Turkic Saudi Arabian Muslims, Chinese Muslims approach the brothers and sisters at Street Dawah Toronto with smiles on their faces, eager for hugs and conversation.

I witnessed a Malaysian sister being greeted by a few people every couple minutes, she had in the past spoken to them about Islam (despite English not being her first language) and they remembered her and returned to speak with her. I witnessed a Somali brother engage with an angry man who still returned week after week, simply due to the brother’s kind attitude. I witnessed a Filipino sister bring her baby with her, yet came just to help the group out. I witnessed brothers from India, Pakistan, Bangladesh all come out to do da’wah. So many nationalities, so few natural English speakers, yet so much sincerity. The fact that there were entire groups of non-Muslims returning week after week to discuss Islam, is testimony to the excellent decorum of these brothers and sisters.

In the end, I spent over 8 years disliking popular street da’wah, but it took me 15 minutes with Street Dawah Toronto to change my mind completely. May Allah continue to grant them mercy, goodness, sincerity and protection ameen.