How I Used Sam Shamoun to Spread Islam 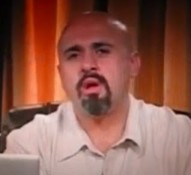 He writes about Islam and Christianity, has a GED, a family, hosts a few programs on a donation funded satellite station and hates Muslims. Sam is unusual, he mostly copies other people’s works, uses archaic arguments and has a fascination with mocking, cursing and abusing Muslims. Despite his personality flaws, and his lack of academic ability, he’s a pretty awful Christian missionary. He’s very predictable, something which I’ve used to my advantage many times.

Yesterday I decided to use Sam for the sake of Islam, something I’ve done a number of times before, and like a baby to its mother’s milk, Sam delivered exactly what I wanted. I called Sam out on one of his really childish claims, and in knowing he’d be unable to control his anger (yes, he has many anger issues), I knew he’d respond. So as I intended, Sam responded by posting my website’s link on his Facebook page, thus leading hundreds of unknowing Christians to this very website.

In a matter of hours, I went from having a normal amount of views, to having Sam send hundreds of Christians to read material critical of Christianity. See, I’ve learned that Sam is thick headed and very egoistic, combined with his lack of self control and flowery language, he’s very easy to manipulate when you want free advertising. I saved a ton of money by not paying for ads on Facebook and by having Sam advertise this website, multiple times on several blogs and his Facebook fan page.

With this having been said, I’ve really got to thank Sam, I now have Christians perusing this website and God willing, it’ll lead them out of the shackles of Graeco-Roman paganism and into Abrahamic Monotheism.