Jonathan McLatchie Continues to Misrepresent Himself

Two days ago, Jonathan wrote an article responding to my review of the debate with Dr. Shabir. I wrote my response, to his response sometime after 6 PM in the night, in the spare hour I had between classes (on Friday) and published it when I finished the last two paragraphs the next day (on Saturday). Then I went to bed, saw that I referred to one of his arguments as circular, discussed it with him and his friends for some two hours, then consulted one of our many resident scholars, realised I made an error and corrected myself. On this, Jonathan says in his new article:

…but only after he had attempted to settle the matter by blocking myself and his other critics from commenting on his page and deleting our comments. He has since deleted the entire thread from his Facebook page. After having consulted his “resident scholar” and being told that I was right and he was wrong, he went into damage control mode.

I’m trying to give Jonathan the benefit out of the doubt, but I am sincerely running out of reasons for doing so. “Damage control”, really Jonathan? When someone makes an error, it is expected that they cease perpetuating that error and they correct themselves and make every effort for that correction to be known. Jonathan though, curtains this “correction” with malice and refers to it as “damage control”. Would he have rather I let the error stay? Would he have rather I didn’t try to remove the error? In my world, it is called being responsible. Once you find the error, you find all sources of the error, correct it, make the correction known and that’s how it’s done. Thus, I am quite surprised that Jonathan, with all of his good intentions would look down upon someone trying to correct an error, that does say a lot about his character. In his words, that would be very uncharitable.

As one would expect, Jonathan was quite upset at my article responding to his, and he did bring some friends along with him to argue with me. I don’t mind that he did that. After two hours of him repeating himself, and his friends posting in various places on the page, ranging from discussing his xenophobic tirades to arguments, whether he qualified them or not. I decided to put an end to it. Once I was able to establish contact with one of our resident scholars, who could either affirm I was correct, or disagree and point out my error, I decided to focus on one thing and unfortunately for Jonathan, that one thing was not to argue with him on Facebook. So, I blocked him and his 2 friends from the page, while I discussed the matter. Once I was corrected by our resident scholar, I unblocked them and allowed them to comment as they willed. This, again, although wanting to be seen as malicious by Jonathan, was merely “crowd” control. Following that, Jonathan was indeed blocked again, but this is because he had blocked the main account for the page, my account. One can read about this here. Therefore, unlike Jonathan, I am willing to publicly correct myself and apologize, when I’ve done something wrong. On that same note, should Jonathan be willing to apologize for his hate speech against Muslims, I would not chastise him for doing so, and I certainly wouldn’t call that back peddling or damage control, in other words, I don’t have a hateful mind that seeks to demonize everything a person does merely because they disagree with me. Moving on to Jonathan’s next point, he said:

Wrong again. As I explained here, I did not make the statement attributed to me at all. Although my word-choice was unquestionably unfortunate, I neither described Muslim communities nor any individuals as “cancer” or a “virus”. Ijaz, as he always does, simply represented what I said in the most uncharitable way conceivable. As far as I recall, I never claimed that anyone had “lied” about me.

It is unfortunate that he continues to deny making the statement. All one has to do is look at my example. Once I quickly realised my error, I apologized and corrected myself. Jonathan on the other hand, simply denies he made any error at all. I’ll leave this lovely recording of Jonathan for interested readers to make up their minds. He then proceeded to say:

Wrong again. I defy anyone to show me where “Muslims who practice Islam are compared to ISIS terrorists” in any video I have shared.

Ijaz Ahmad accuses me of deception because I stated that he failed to mention any of Shabir’s weaknesses in his opening statement, such as his misuse of Greek grammar in relation to John 1:1 (documented here). Ijaz says that I am dishonest because he did mention John 1:1 in his review of the debate.

But this is precisely the point.
Ijaz simply repeated this poor argument, despite the fact that it has been refuted ad nauseum.

This is Jonathan’s problem. He does not correct himself and say that I didn’t omit any mention of Dr. Shabir’s use of Greek grammar. Instead of apologizing for this mistake, or false claim, he decided to shift the goalposts. Now the issue was not that I had failed to mention the use of Greek grammar, the issue was that I did not remark more about it. All Jonathan had to do was correct himself, he did not need to shift the goalposts. He then said:

I never claimed that Shabir did not argue that the Trinity was contrary to the Old Testament. He did claim that. I happen to think he is wrong in claiming that, but Ijaz contends that Shabir in claiming this pre-empted this statement from my opening remarks, which is simply not the case.

This is quite disingenuous from him. Did Dr. Shabir address the Bible (read as “Christian scripture”), which included both the Old and New Testaments, in his opening statement? Yes, he did. So then, on that basis, how can Jonathan claim that this did not happen. Dr. Shabir, pre-empted Jonathan’s appeal to scripture, by arguing based on that very scripture in his own opening remarks. There is nothing to be mistaken of here. Jonathan just does not want to accept this fact. He then said:

Ijaz then back peddles with his claim from his review that I had made the argument about the eternality of the Qur’an in my opening statement. He said “In my review, I did not claim that he made this argument, I specifically said that he referred to it.”

Ijaz also contends that, if I am consistent, I would have to say that the angel of death is a fourth member of the Trinity. But this is simply mistaken — there is no verse in the Bible to my knowledge where we are told that God alone actively brings about death…

This is correct, in Christianity, death is a rival to God and not an action that God can do of his own volition. According to Christian scripture, death in fact had mastery and power over God. Although it should be mentioned that I did refer him to 1 Thessalonians 4:16, which does mention that his God needs the voice of an archangel for the resurrection. Therefore, again, an agent of God according to Jonathan is sharing in the divinity of God. Or, perhaps I can make it even simpler for him. God creates, yet women also create life, women are agents of God’s creation. According to Jonathan’s logic, does he now need to add 3 billion women to the Godhead? He has not interacted with the argument of agency, or how it responds to his argument. Rather, he has opened a can of worms for Christianity, and I applaud him for that. He then argued:

I am giving the historical interpretation of this text. Is Ijaz really prepared to say that ibn Kathir, al-Tabari, al-Qurturbi and ibn Ishaq all got it wrong, and that we had to all wait for Ijaz to show up in order to give us the correct meaning of the text?

Except it’s the case that Ibn Kathir disagrees with Jonathan. It’s a rather lengthy read, so I’ll link to it here. That’s called proof by contradiction. We should take note of the language that Jonathan uses, he says:

The meaning of the text that I gave seems to me to be clearly the most plausible and the most clear-reading of the texts. Ijaz’s explanation seems rather ad hoc.

He outs himself. The meaning of the text he gave. You’d notice in the debate he also didn’t cite or quote anyone’s interpretation of those passages, and today he admits it was the meaning which he gave. I think that says a lot. Jonathan then proceeded to shift the goalposts again, he says concerning the Gospel being the Injeel….

He may have mentioned it, but he certainly offered no comment by way of response to the argument.

Yet, his problem with me, was that I did not mention it. Now his problem is that I didn’t respond to the argument. So it’s not that I misheard him or misrepresented him. Rather, in almost every instance he has proven to be wrong, he shifts the goalposts, at first I didn’t mention it or comment on it, then it’s, I did mention and I did comment on it, but not mentioning or commenting enough. It’s either one or the other, and at this point he truly is wasting my time.

Islam is certainly on the rise, and I think it will have greater and greater influence….there are Shari’ah courts in the UK. France has a bigger problem with Islam at the moment.

What does France have a problem with? Islam. It should be noted that others did call Jonathan out on this mistake of referring to Shari’ah Courts as a “fact”: 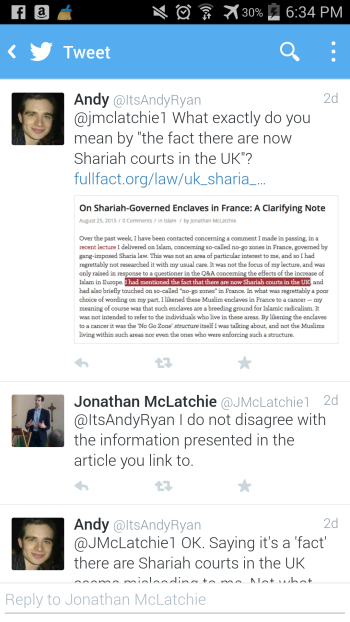 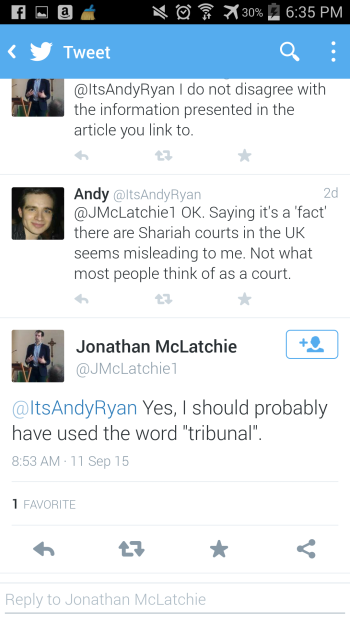 As Jonathan has repeatedly said, he has, “no problems with Shari’ah Law per se“. Which leads us to the end of his quote, which says:

So now, everyone, a process of elimination. The problem with France is….Islam! Who practises Islam? Muslims. Do you know who else thought a minority in Europe with different customs and a religious law was like a virus?

“. . . the discovery of the Jewish virus is one of the greatest revolutions that has taken place in the world. The battle in which we are engaged today is of the same sort as the battle waged, during the last century, by Pasteur and Koch. How many diseases have their origin in the Jewish virus!” – Adolf Hitler (quoted in Burleigh and Wippermann, Racial State, p. 107)