The Sun Sets on Nabeel Qureishi

Most people understand that language has depth. That language has devices that are used to convey ideas, thoughts and beliefs beyond a one dimensional literalistic paradigm. Most people are familiar with the sciences of exegesis and hermeneutics, which are often employed in helping us to understand scripture. Now, that is most people and not all people. One of those people who doesn’t understand these things is Nabeel Qureishi. For example, he recently posted this: 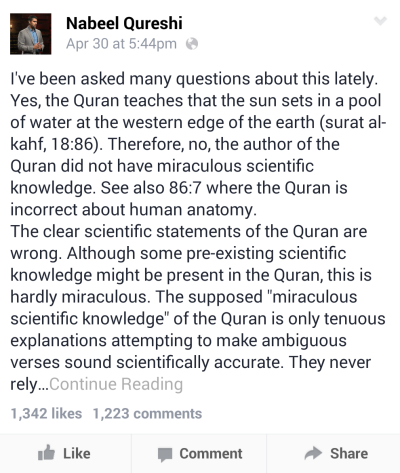 Now, see if he had read his Bible, even given it a cursory glance he’d come to realise that the phraseology of the Semitic people who wanted to describe a limit or boundary as given by the sea would often use the language of, “where the sun sets”. So for example, we read in the Qur’an 18:85-86:

He set out (westwards) on an expedition, Until, when he reached the setting of the sun, he found it [as if] setting in a spring of dark mud, and he found near it a people.

So, as these passages state, he set out on a journey through the land until he reached a limit where he found a people. What was used to describe this limit? The sea and the sun setting. This was a phrase used to describe the limit of one’s journey being bounded by some body of water be it a sea or an ocean, a lake etc. In Nabeel’s very Bible, such phraseology is used:

“From the wilderness and this Lebanon, even as far as the great river, the river Euphrates, all the land of the Hittites, and as far as the Great Sea toward the setting of the sun will be your territory.” – Joshua 1:4

“See, I have apportioned to you these nations which remain as an inheritance for your tribes, with all the nations which I have cut off, from the Jordan even to the Great Sea toward the setting of the sun.” – Joshua 23:4

Some translations don’t use a literal rendering of the words, they try to contextualize them. So in the NASB, NIV and other similar translations they try to translate a text according to its usage and not according to its literal meaning. The Qur’an in most cases uses a literal rendition of the Arabic. The literal rendition of the above Bible passages, uses the exact same terminology that the Qur’an does. We read from the ISV:

Your territorial border will extend from the wilderness to the Lebanon Mountains, to the river—that great River Euphrates—all the land of the Hittites—as far as the Mediterranean Sea where the sun sets.

In one instance, there had to be a citation note explaining why a portion of this passage was excluded from the main translation:

Now look, I have allocated these nations that remain as an inheritance for your tribes, including all of the nations that I have eliminated, from the Jordan River to the Mediterranean Sea to the west.[b]

b. Joshua 23:4 Lit. Sea that faces the setting sun

To aid Nabeel, I’ve used a popular language device in the title of this post. “The Sun Sets on Nabeel Qureishi,” is an oft used language device. Given that Nabeel seems to read things literally, I wanted to point out to him that not everything can or should be read literally. Here’s some examples of language devices being used in sentences and they aren’t meant to be understood literally:

So, Nabeel, I’m addressing you, the guy in this picture:

“The Sun Sets on Nabeel Qureishi,” does not mean that I think the sun is literally falling on top of you. It does not mean that I want the sun to harm you. It does not mean that I think the sun goes up or down. It quite simply, does not mean anything literally. In modern English, the sun setting for someone can have varying meanings. It can mean they’re shining less brightly as a person, and just so I don’t confuse you, by shining brightly I mean they are not performing according to expected standards of normalcy. In some cases it also means the person is dim (again not literally, but in terms of wit, see: dimwitted), or in decline (again not literally in decline, like as if they’re sitting or stooping, I mean performance or career wise) in some way.

I hope you’ve learned something very valuable today. You can swap a t-shirt for a suit, but it doesn’t make you any smarter. As for his claim on Qur’an 86:7, I didn’t want to confuse him any further than he already is, but for everyone else here’s an excellent article explaining the basic Arabic usage of the terms in the passage.