Mari Kaimo: Religious Beliefs Not to be Discussed in Group About Religious Discussion

I’m not exactly sure if I’ve lost my sanity or if I’m misunderstanding something. Let’s take a look at this group’s definition:

If I’m reading this correctly, this is a group created for the purpose of Muslim and Christian Discussion. Just to ensure I’m understanding this, I checked the group’s “about” definition:

I was a bit surprised while scrolling through my newsfeed to see the following:

An Anglo-Christian person being removed for heresy, in a group which its purpose is to discuss religious belief…..that’s….odd? So I decided to look a bit closer: 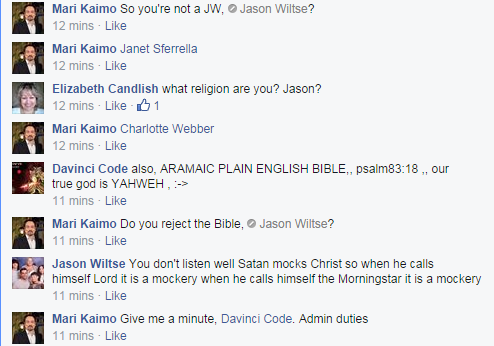 Mari Kaimo wastes no time, if you reject the Bible – you’re a heretic, which is odd in a group that is dedicated to Christian and Muslim dialogue. It suddenly made sense why I could find at most 1 or 2 active Muslims commenting in the group. They’ve been banning Muslims in a Christian-Muslim religious dialogue group because to them, Muslim beliefs were heretical.

Surely, this “Preacher” and friend of Shamoun would know that in a dialogue group about religion, there would be users who practised different religions in all their forms and differences. Surely? I guess not:

Where is this leading…?

I had just one reaction, this just sums it up entirely:

I’ve seen some pretty ridiculous things in my life. This is by far, one of the single most absurd things I have ever had the displeasure of witnessing. I probably stared at my screen for a few minutes, in sheer awe at the line of reasoning being played out in front of me. To recap….., this is a group created for the purpose of inter-faith dialogue and discussion. However, if you practise a religion which Christianity (as believed in by Mari Kaimo) disagrees with, you’re going to be kicked out/ removed. Surely, there are smarter people out there in the world. I’ve said it once before and I’ll say it again, this guy is a walking, talking, breathing contradiction inside and out. I pray that this is bad sarcasm at work, there is nothing, no excuse that can allow anyone to rationalize the absurdity of such a situation. If this is anything to go by, I thank God that these are the Christian Apologists and Missionaries that currently lead the Christian faith. They have made our job of conveying Islam so much easier. With people like these, there is no question as to why so many Christians quite literally get frustrated and leave the faith. I feel embarrassed for the Christian community because of this guy, in no way does this person represent a religion with 2000 years worth of study behind it.