I’ve mentioned this before, and I’ll mention it again – James White of Alpha and Omega Ministries lacks decorum at all levels of intellectual integrity and responsibility. It is quite depressing to see an adult man, a leader of a religious community behave in a manner which is so disturbing, that I must ask if he is being serious. See, James is fond of attacking people viciously on his program, but refuses to let others speak and address his claims. For example, he openly criticizes Shaykh Deedat, a man who responded to the evangelical setting of the 80’s and 90’s. Yet demeans him based on the apologetics of the 21st century. It’s easy to attack a dead man, it takes real bravery and intelligence to attack a living man who uses today’s apologetics.

He criticized and attacked both Farhan and myself on his program, yet refused to allow either Farhan or me to address his claims, as both of us called in. What does that say about his integrity? Not very much. What is worse is that he thinks that this behaviour makes him, invincible. I’d like to quote James’ statement on the program, he said:

James is fond of using the word consistency. I therefore ask James, are you being consistent in applying this statement to me? He is undoubtedly a hypocrite of the highest order for he himself who criticizes Muslim scholarship, when he himself cannot speak the Arabic language, nor does he understand the historical background of Islam nor is he proficient in any Islam science, let alone he is unable to even pronounce the word Qur’aan correctly – then his statement clearly applies to himself. A man who cannot pronounce the name of the very book he is arguing about, surely has no grounds to stand on when criticizing others. James was upset at me finding a lot of Dan Wallace’s excuses in the book Reinventing Jesus to be laughable, he claims it is one of the greatest apologetic works he has written. In that case, let me show you how lowly James’ standards are for historical proofs for Christianity, these are quotes from my edition of the text: 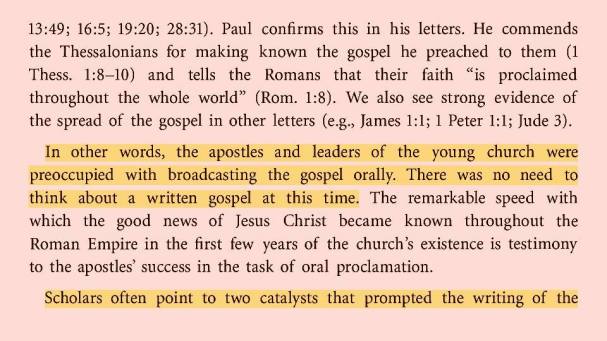 The scenario here is that Dan Wallace spends an entire chapter giving numerous excuses for why the early Christians refused to write any of the oral traditions down. So after an entire chapter, I’m still reading and thinking that no one can be this daft, it is obvious to any scholar of the early Church that they believed Christ would return in their generation, and herald the end of the world – thus there was no need to record any of Christ’s words. Finally, at the end of the chapter, in three conspicuous lines, Dan mentions the proper reason and it is quite a hilarious one at that. They were too zealous in preaching orally, that not a single man thought to write any of this down. Not one. That is absolutely an ingenious claim. That to me is  laughable, is James willing to declare that this is an academic and historically responsible claim? We’ll see….

The second quote which is highlighted continues:

So the two real reasons are finally declared, and what are they? The disciples began to die off and for some reason the early Christians 100% missed Christ’s message about his second coming, it went so badly over their heads, that within the first few decades of them recording nothing – because they were too busy as he claimed previously and then realising their saviour’s promise did not materialize, then began to record the oral traditions. If James finds these claims to be credible, that (a) the disciples were zealous missionary robots preaching orally to the extent they thought of writing down what God spoke to them was nonsensical, and (b) they – the entire early Church misinterpreted what he had told them, then I invite James to applaud and promote such “scholastic wisdom”.

At one point James mentions that the Christians who surround him, mocked and ill spoke me after our discussion on his program and boasted of this sinful behaviour. It is obvious that Christians will champion him and Muslims will champion me, but is James so daft and fond of trumping his own horn, that he was unable to see that he is guilty of what he claims of me? It is of no use for me to excuse him for being unable to quote a Greek passage, when he cannot excuse the mistakes of others. That is beyond arrogance and self conceitedness, that is absurdity beyond absurdity. You’ll find that James often claims that he won X debate or Y debate decisively, when Muslims make the same claim he demands that they let the audience decide. How is that consistent? So when he says that his crowd endorsed his arguments and did not endorse mines, is he not mature enough to realise that the Muslim crowd will do the same for me – discredit him and endorse my arguments? Perhaps he should take issue with the British Muslim speakers he has debated, all of whom endorse my appearance on his program.

To me, what however is most ignoble of James, are the two following acts which I cannot believe he subjected himself to. He made it a point to mention that he paid for the phone call that led to me appearing on his program. If James wants, I have no problem forwarding a check for that cost. Since he’s made such an issue out of it, I ask him to name the cost of the call and I’ll gladly pay it. What he fails to mention to his viewers however, is that I called multiple times during that night. The first of which I spent a few minutes with Richard, then I spent a significant amount of time on hold, which I myself paid for. Eventually on waiting for James to finish his soliloquy for roughly 10 – 15 minutes, my credit cut. It was agreed before hand that if such an issue should occur, Richard would call me back. If I had known that James was counting his pennies, I would have declined Richard’s offer and made other arrangements. So James, let me know the cost of the call, and I will gladly repay you for your kindness, that is no issue for me.

James then, also took offense to me decrying his use of a tabloid website. He is supposed to be a Church leader, a good Christian man, but instead he links to a tabloid website posting personal photos, stolen photos which then were used to speculate about sexual promiscuity. Is a respectable man, one who reads such perverse material and encourages defaming a man’s privacy? Out of dignity and respect, honour and civil duty, godliness, I refused to engage in discussing gossip, wild speculations and tabloid materials. Due to this, James claims that I made ridiculous, offensive and childish claims after last week’s program. I invite James to read from my only article after the program and quote for us what offensive, childish and ridiculous claims I made. With this, we have come full circle.

The only reason James would make such public statements, is in the event that the person in which he is attacking through ad hominem, deceit and verbal abuses, cannot respond to him on the same stage. For that, I ask, is that the behaviour of a man with dignity, honour and integrity?