Did the Qur’an Copy the Bible’s Violence?

Very often I am presented with two claims.

Claim #1: The Qur’an copied from the Bible
Claim #2: The Qur’an is a manual for violence.

Those who make these claims do not seem to understand that the only possible conclusion in which both these claims can be true is if the Qur’an’s “violent” verses were copied from the Bible. To help those who hate us understand this point, I often ask the question:

Did the Qur’an Copy the Bible’s Violence?

Quite often the answer is no. Yet if the author of the Qur’an did create a religion for the purpose of warfare, genocide and terrorism, and if this author was copying from the Bible then it stands to reason that the Qur’an at the very least should contain some or most of the Bible’s most violent verses. Yet this is not the case. In fact, the most violent verse in the Bible is not matched by any verse of the Qur’an:

“However, in the cities of the nations the Lord your God is giving you as an inheritance, do not leave alive anything that breathes.” – Deuteronomy 20:16 (NIV)

It would seem very strange that the author of the Qur’an (assuming it is not God as Christians claim) would create a religion for the purpose of warfare and copy from the Bible, while at the same time avoiding copying any verses which allow for violence. Surely, a religion created for the purpose of warfare which had the Bible available for source material would quote the most violent verse possible to support its ideology, yet we find no equal verse to Deuteronomy 20:16 in the Qur’an, or a verse more violent than it altogether.

On the other hand, the Qur’an echoes a teaching once given to a previous messenger (or messengers) to the Children of Israel:

Posted on September 11, 2016 by Ijaz Ahmad Leave a comment

In August of this year I had the pleasure of debating my longtime colleague and friend, Luis Dizon in Toronto, Canada. Both events were held at the TARIC Islamic Center, moderated by Br. Sadat Anwar and recorded by Sr. Tabasum. The topics debated focused on the nexus which brings Muslims and Christians together to this very day, the status of the New Testament and Islam’s view of the Bible. Islam’s relationship with the Ahl al Kitab (the People of the Book) is one filled with centuries of fruitful discussion and dialogue, and with this tradition behind us, both myself and Luis decided to debate these core topics.

Debate 1: “Is the New Testament the Word of God?”

Debate #2: “What Do the Qur’an and Islamic Tradition Say About the Bible?”

I sincerely pray that these debates can lead many to enlightenment and to the truth of Islam. Ameen.

There are two major debates happening soon, details are provided below. 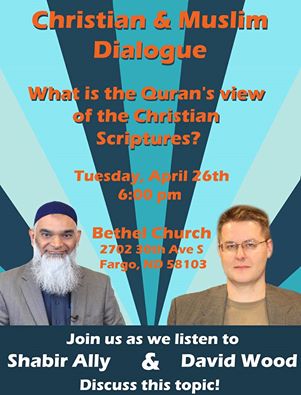 Considerations for a livestream are ongoing, however the debate will be recorded. Links to the video or possible livestream will be posted when they become available. Sam Shamoun has asked that we do not mention the terms “hammer” or “father” in our interactions with Mr. Wood given his ongoing mental issues. Women are also asked not to wear clothing that may attract Mr. Wood’s attention due to his gender proclivities.

Topic: “The Doctrine of the Trinity: Man Made or Divinely Stipulated?””

The debate will be livestreamed, we will be sharing the link when it becomes available. Details about the event’s location and time will be provided when they also become available.