It is with a heavy heart that I convey the sad news of the passing away of my teacher, Sheikh Muhammad Mustafa Al-A’zami (rahimahullah).

The Sheikh was one of the world’s premier scholars of Hadith, and received his education at Dar al-‘Ulum Deoband, India (1952), al-Azhar University, Cairo (M.A., 1955), 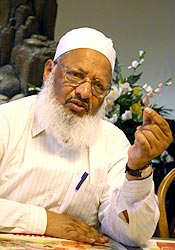 and the University of Cambridge (Ph.D., 1966). He was Professor Emeritus at King Sa’ud University (Riyadh) where he also chaired the department of Islamic Studies.

His publications include Ageless Qur’an: A Timeless Text, The History of the Qur’anic Text, Studies in Early Hadith Literature, Hadith Methodology and Literature, On Schacht’s Origins of Muhammadan Jurisprudence, Dirasat fi al-Hadith an-Nabawi, Kuttab an-Nabi, Manhaj an-Naqd ‘ind al-Muhaddithin, and al-Muhaddithin min al-Yamamah. He had also edited numerous other works including Kitab at-Tamyiz of Imam Muslim, Muwatta of Imam Malik, Sahih Ibn Khuzaymah and Sunan Ibn Majah to name a few.
In 1980 he was the recipient of the prestigious King Faisal International Award for Islamic Studies.

In the western world, the Sheikh was best known for his critical investigation of the writings of the famous orientalists Ignác Goldziher, David Margoliouth, and Joseph Schacht.

I was fortunate to spend almost 15 years with the Sheikh learning from him and benefiting from his knowledge.

A great loss for the Muslim Ummah!