This isn’t the first time he’s done this. He typically makes a false accusation, then denies it and then deletes it. He did it with the no-go zones claim and then he did it with the vicious and slanderous attack against Br. Mansur of Speaker’s Corner in London recently.

Today, he’s done it to me. He’s deleted his comment but his follow up comments are still visible at this point. 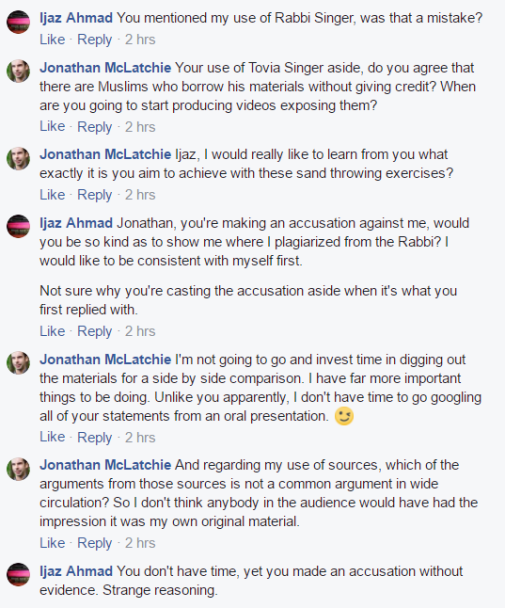 Jonathan’s reasoning is strange here, he claims that the issue has not bothered him but at this point he’s been sharing a video about the very issue everywhere, going so far as to have his friends tag me in it and responding personally to me about it. He’s even gone and uploaded the video of him being defended with rather poor excuses, why go through all of this trouble, if it isn’t bothering him?

I’ve repeatedly asked him to provide evidence of my plagiarising from Rabbi Tovia Singer, instead he’s deleted his initial false accusation but continued to imply it in other comments. So the question stands, if he doesn’t have the time to work through this issue and it isn’t bothering him, why make a false claim about me and attack me?

Seems like very odd behaviour for someone who doesn’t believe they plagiarised, but as admitted in the screenshot provided in this blog post, Jonathan’s presentation was actually written by someone else and the extent of his involvement was to use it as his own without reference, that is plagiarism.

Edit: He’s admitted the comment with the false claim of plagiarism was deleted but is blaming his colleague Rudolph Boshoff for the deletion…