The Markan Gospel’s Systematic Development in Light of Miracle Sets

Traditionally speaking, Christian apologists have always appealed to the Gospel ascribed to Mark’s haphazard narrative inconsistencies (in regard to the narratives of the synoptics) as a proof of its early authorship being attested by Papias, as recorded in Eusebius’ Church History:

“This also the presbyter said: Mark, having become the interpreter of Peter, wrote down accurately, though not in order, whatsoever he remembered of the things said or done by Christ. For he neither heard the Lord nor followed him, but afterward, as I said, he followed Peter, who adapted his teaching to the needs of his hearers, but with no intention of giving a connected account of the Lord’s discourses, so that Mark committed no error while he thus wrote some things as he remembered them. For he was careful of one thing, not to omit any of the things which he had heard, and not to state any of them falsely. These things are related by Papias concerning Mark.” – 3.39.15.

However, using narrative criticism, we are able to examine the patterns of literary development as envisaged by the Markan author. Thus, as we will see, the Markan Gospel cannot be considered disorderly, but should be considered as a work of systematic literary development. Whatever work Papias was referring to, has not remained with us (not a single papyri of the Markan Gospel exists earlier than the mid to late 3rd century), or what later Christians (such as Eusebius) identified with earlier Christians (Papias) is mistaken and as such, should be taken as mere anachronistic apologetic revisionism. As the “Church” began to develop, so did its history, especially in regard to its origins. This might seem odd to some, but we need to remember that as the various early Christian communities began to coalesce, a homogenous “universal” or Catholic history of the “true” Church began to manifest itself, what we refer to today as the proto-orthodox Church.

“There is a sense in which the very notion of tradition seems inconsistent with the idea of history as a movement and change. For tradition is thought to be ancient, hallowed by age, unchanged since it was first established once upon a time. It does not have a history, since history implies the appearance at a certain point in time, of that which had not been there before.

According to the Ecclesiastical History of Eusebius, orthodox Christian doctrine did not really have a history, having been true eternally and taught primitively; only heresy had a history, having arisen at particular times and through the innovations of particular teachers Roman Catholics polemics has frequently contrasted the variations of Protestantism with the stable and unchanging doctrine of Roman Catholicism.

It seems that theologians have been willing to trace the history of doctrines and doctrinal systems which they found to be in error, but that the normative tradition had to be protected from the relativity of having a history or being, in any decisive sense, the product of a history.” – pp. 7 – 8.

Many Christian scholars on early Christian traditions, agree that Church history tends to be generative as opposed to retentive (as is often claimed):

“At the same time, such individual memories also typically come to be calibrated in relation to an emerging communal consensus— either reactively or, more often, in convergence with it. Memory of this sort is of course highly episodic, lumpy, and often somewhat formulaic— characteristics to which even eyewitnesses are hardly immune. And it can often be generative of meaning, rather than merely retentive.” – Markus Bockmuehl, Simon Peter in Scripture and Memory: The New Testament Apostle in the Early Church (pp. 11-12).

So, while the quote attributed by Eusebius to Papias may be more of a generated communal teaching which later manifested itself in Church tradition, can we truly say that the Gospel ascribed to Mark is the work of a scribe hastily writing down an orator’s recounting, as opposed to a work of systematic literary development? The answer is no. There are two sets of miracle stories in the Markan Gospel that follow a specific pattern, that bear witness to an intentional development of the Christ’s image in comparison with the Messianic archetype prevalent throughout Judaic literature. 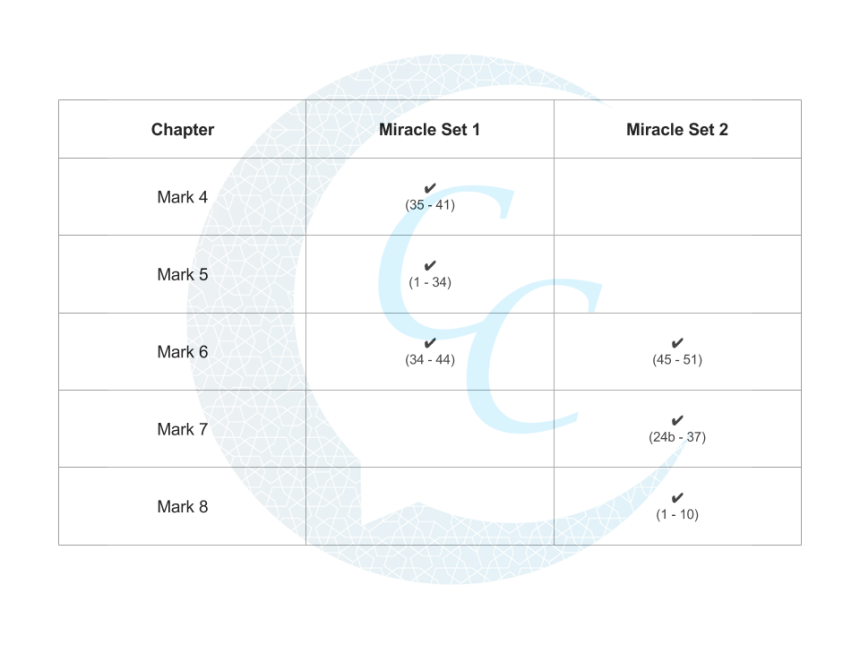 As we can see from this simple break down, the miracle stories are equally divided into two sets. Each set has the same pattern and form of miracles: one sea/ water – three healings – one mass feeding. Both sets of miracles, also occur within six successive chapters, with the first set ending and the second set beginning within the same chapter and within one verse of each other. These are not and cannot be coincidences, or disordered in any way. They are quite specific in pattern and form, the ordering of these miracle stories are intentional and systematic. Further analysis shows, that the author derived these miracle stories from earlier Jewish Messianic types, who were to guide their people in times of great turmoil:

Thus, the intention of ordering and mentioning these specific miracles attributed to Christ, was done with the purpose of painting Christ in the same image and stature as that of Moses, Elijah and Elisha. In fact, the author who developed these miracle sets, does include specific mention of Jesus being like, or being Elijah within the same chapters:

They replied, “Some say John the Baptist; others say Elijah; and still others, one of the prophets.” – Mark 8:28.

Therefore, it should be concluded from reading the Gospel ascribed to Mark, that this piece of literature has undergone intentional development, with specific goals in mind to paint Christ in light of earlier Messianic archetypal figures. The narratives are in order, for the purpose the author intended to achieve, and as such, we can understand that it is the case that either Papias’ statement refers to some other piece of literature, or that the Gospel of Mark has undergone significant systematic literary development with a Jewish audience in mind and as such, is no longer in its original form.