Did the Disciples View Jesus as a Deity?

There is no doubt that the disciples of Christ saw him as a man of religious and spiritual authority. It is the status quo to use the statement of Thomas, known as “Doubting Thomas” to illustrate the belief that the disciples viewed Jesus as a deity. In this article, we’re going to employ the same methodology to examine two specific incidents that chronologically follow each other which paints Jesus in a completely human light. The testimony, or rather the alleged testimony of the disciples of Christ in regard to their reactions of Jesus’ statements is perhaps often abused by our evangelical counterparts to enforce the perception of deity. It is in this light, that if we were to use the same line of methodology we’d develop a startling realization due to the disciples’ reactions.

The two incidents we’re going to be examining are those of the “Denial of Peter” and the “Sleeping at the Garden of Gethsemane”. We’ll be basing our study off of Mark 14:31-42, Matthew 26:34-46 and Luke 22:34-47. In summation, in gauging the disciple’s reactions to Christ’s statements, while examining the inter-textual development of the Gospel’s narrating of these incidents, we will then be able to draw an educated understanding of the disciple’s perception of Christ.

The synoptic Gospels of Matthew, Mark and Luke have an integrated textual legacy. Modern scholarship agrees that the contents of Mark were used as a source for both Matthew and Luke. Similarly, another plausible source would be the Q Source Material, that is the information not found in Mark but found in both Matthew and Luke. The diagram below illustrates this textual phenomenon: 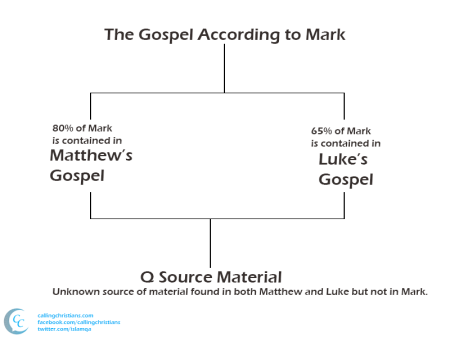 The variations in the accounts inter-textually do not present any major conflicts, but we do see a correction due to possible embarrassment in both Matthew and Luke. The text in Mark[1] is as follows:

30 “Truly I tell you,” Jesus answered, “today—yes, tonight—before the rooster crows twice you yourself will disown me three times.”

31 But Peter insisted emphatically, “Even if I have to die with you, I will never disown you.” And all the others said the same.

In this scenario we are presented with a peculiar incident. If we assume Peter believes that Jesus is God, here we witness God telling Peter about something which will happen and Peter denying that God’s knowledge is correct. Peter is in essence, standing before God and telling God that he’s wrong. Yet, he’s not merely telling God that God is wrong, he’s emphatically doing so! The anonymous authors of Matthew and Luke saw this as a problem and so we find this same incident purposely altered. This embarrassing scenario could not have happened if Peter truly believed that Jesus was God, for Jesus is the truth, the way and the life[2]. The incident is then tailored to absolve Peter of his blasphemy and/or to deify Christ; if Peter believed Jesus to be a God then he would not have challenged him.

In the Gospel according to Matthew[3], we read the same incident but with a minor change:

34 “Truly I tell you,” Jesus answered, “this very night, before the rooster crows, you will disown me three times.” 35 But Peter declared, “Even if I have to die with you, I will never disown you.” And all the other disciples said the same.

Peter is no longer emphatically challenging the man whom he believes to be a God. This one alteration of a single word transforms this event. In Mark’s version, it is Peter emphatically challenging God. In Matthew’s version, Peter still challenges Christ, but the context now transforms itself into an emotional retort thus making Peter appear to be submissive to Christ’s words. This however, is still a problem. Peter cannot be challenging God, he cannot be telling Jesus that He is wrong. Luke then, removes Peter’s words altogether[4]:

34 Jesus answered, “I tell you, Peter, before the rooster crows today, you will deny three times that you know me.” 35 Then Jesus asked them, “When I sent you without purse, bag or sandals, did you lack anything?”

Peter’s challenging of God now never happened! Luke completely removes this incident from ever happening. We must also remember that the Gospel According to Luke, begins with the author declaring that he’s producing a truthful, a more accurate, an orderly account of the events of Christ’s mission[5]. Thus, Luke’s account is a correction of the inaccurate information in the other Gospel accounts. This would then lead us to believe that Luke removes this scenario from his Gospel due to its negative and embarrassing implications. If Peter truly believed that Christ was God, he’d never challenge him and definitely not “emphatically” so. In the Greek of the NA 28, we can see the gradual removal of the word, “emphatically” and then the removal of Peter’s response altogether.

In Mark’s Gospel we find the term emphatically[6]:

In Matthew’s Gospel the term emphatically has been removed[7]:

In Luke’s Gospel, the entirety of Peter’s challenging of God is removed altogether[8]:

Why then, for a second time does Luke remove entire scenarios of the disciples openly disregarding, disobeying and ignoring Jesus, whom we are expected to believe they viewed as a God?

We must critically assess Peter’s actions when Jesus informs him that he will deny Him. If Peter viewed Christ as a God, and God is telling Peter what will happen in the future; on what basis can Peter deny God’s knowledge and emphatically reply that God’s wrong? This seems to be quite absurd. There can be no justification for Peter’s challenging of God, to God’s face. The issue here, is that Peter’s not only disagreeing with Jesus whom he believes to be God, but that he’s emphatically insisting that God is wrong. This would not be a problem, had it not been for the other Gospel authors taking issue with this incident. Both Matthew and Luke were surely embarrassed by this scenario. Surely, Peter whom the Church is built upon as Christ himself declared[9], must be submissive to God’s commands. Peter cannot be dismissive, he cannot be seen challenging God to his very face. Thus, this incident is embarrassing because it gives the impression that either Peter does not see Christ as a deity (as Peter would never challenge God) or it gives the impression that the disciples were of absolutely weak or little faith and the Church cannot be built upon unfaithful, unbelieving, sinful persons.

This issue is only exacerbated by the disciples in the Garden of Gethsemane. It is very difficult to accept that the disciples could have God stand before them, live with them, eat with them and then disobey him. Moments before this incident occurs the disciples all profess their love and swear never to abandon or deny Christ as both Mark and Matthew mentioned[10][11]:

31 But Peter insisted emphatically, “Even if I have to die with you, I will never disown you.” And all the others said the same.

35 But Peter declared, “Even if I have to die with you, I will never disown you.” And all the other disciples said the same.

It is highly unbelievable that in the span of a few minutes the disciples would profess their obedience to a man they considered to be God, would then change their minds and disobey him three times even after he scolded them. They essentially all changed their emotions in regard to him in the span of a few minutes. If God stands before you, commands you to do something, then scolds you for not doing it, then as a person of faith, a person of strong faith, you’d do your utmost best to fulfill God’s commands. Yet the disciples do exactly the opposite, they reject God’s commands and seeing that Christ is in need they all went to sleep. A loved one, the Holy of Holies, God Incarnate stands before you, imploring you to do something and we are expected to believe the disciples decided that sleep was more important?

If we were to gauge them by their reactions to Christ’s words and commands, then they clearly seem to be responding to the words of a man and not God. No believer in God would challenge God’s knowledge, no believer in God would listen to God’s commands and then decide to sleep at a time of great importance. If we are to believe that the disciples viewed Jesus as a God, then their reactions teach us the exact opposite, we can quite clearly see they did not have the fear or love of God in them.

By examining the inter-textual legacy of the synoptical Gospels, using the evangelical criteria of embarrassment we find clear textual emendation to absolve the disciple’s humanizing, disobeying, rejecting and disbelieving actions and words in regard to Jesus the Christ. The very reactions of the disciples to Christ’s words give the impression that they did not view him as a deity; this is in large part to their challenging of his statements and in their refusal to obey his requests even during his time of need. This is not what we would expect from men who believed God sat among them, lived with them, ate with them and suffered with them. Instead, we find a human Jesus, one whom the disciples could challenge, could disagree with and a Jesus whom they could disrespect and ignore. The very behaviour of the disciples is akin to the disbelieving Pharisees who rejected the Christ who disobeyed him, ignored him and challenged him (cf. Mark 7, Matthew 15, John 8 etc).

In conclusion, there are two perspectives we can walk away with after having looked at these incidents from several angles. Either the disciples were men weak of faith, who rejected the Christ and whose behaviour emulated that of the Pharisees or the disciples did not view Christ as a deity as demonstrated by their challenging, disobeying and disregarding of Christ’s commands.