Br. Yahya Snow once again reproduced another one of my articles on his blog (thank you to the brother). Fortunately (?), Sam Shamoun is freaking out, him and his cheerleader, Radical Moderate did something I sort of did not expect – write a homosexual fantasy story about me. Now, I imagine that this was to paint me in a bad light – problem though, this is the second time that Sam and his cheerleader have made homosexual advances towards me. The first time they threatened to rape me, and now, it seems as if they’ve had time to build a story around their threats: 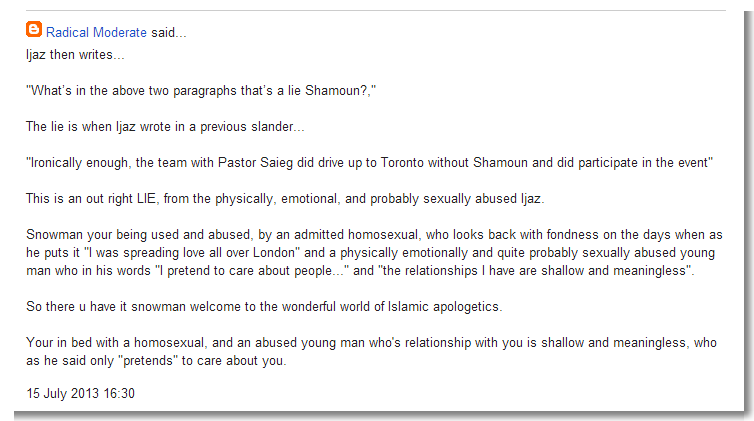 Now, if this were a one off incident, it wouldn’t bother me much. However, now I’m a bit troubled by this, unsettled really, what is Sam Shamoun’s and his cheerleader – Radical Moderate’s addiction to placing me in a homosexual light? Once, maybe it’s you know just something to mock me, but twice? It seems as if Sam Shamoun and Radical Moderate are projecting their homosexual repressive tendencies upon me for some peculiar reason.

Moving on….I’d really like to see where I admitted to being homosexual, or said I lived in  London? I think I’ve made it quite clear that I’ve never been to London – and that I live in a tiny Caribbean island in the middle of nowhere (1, 2). I’m not sure since when I became sexually abused either, but seeing as both of the authors of this homosexual fantasy are Christian, I can see why I as a younger adult male would fit into their really sick fantasies.

Sam, Radical, if either of you are reading this – while I appreciate that you’re trying to vent your sexual feelings in the form of mockery, I see through your veil of angst, your need for acceptance. If you need someone to talk to about your homosexual tendencies, I can recommend counselling for you, but I’m going to have to let you both down easily – I’m not interested, I happen to like women and…..only women, so I’d appreciate if you’d stop including me in your homosexual fantasies.