Jonathan McLatchie Makes a Fundamental Error About the Bible

The Bible consists of many forms of revelation, including ‘literal inscriptions’ from ‘finger of God’ according to Exodus 31:18. Jonathan didn’t know this and as agreed by his friends, he did make an error. We do expect him to say that the video takes him “out of context”, so we do invite everyone to watch the video of his appearance on the Trinity Channel (YouTube) between minutes 44 to 52, for full context of his mistake. 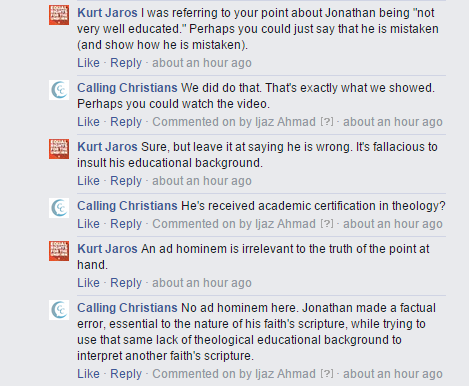 We’d like to thank Jonathan for sending his friends over to spam the page, at the very least we got a candid admission from one of his friends and admirers and he indeed was not taken “out of context”, this time, and that he did indeed make an error fundamental to the theology of his faith.

Posted on October 9, 2013 by Ijaz Ahmad Leave a comment

We Muslims should not be excited at the prospect that Tommy Robinson has departed from the infamous English Defense League. Rather, we must try to understand Tommy’s motives and intentions in his recent jump to the Qulliam Foundation. The EDL is not a government funded group, the Qulliam Foundation is. This is an important point, but we shall return to this later.

When you think of the EDL, the first word which comes to mind is hooliganism. You conjure images of drunkard buffoons running riot through the streets of Britain attacking Muslim homes, businesses and places of worship. You think of violent attacks and white pride terminology and slogans. You do not think, ‘an educated think thank’, you think the exact opposite. For all it’s worth, the most popular slogan that any EDL campaign as managed to bring to an international level is the absolutely hilarious Muslamic Ray Gun video:

Tommy Robinson is only seeking to legitimize his anti-Islamic rhetoric in a suit and a tie, provided by government funding, as opposed to shouting angry slogans in marches meant to disgrace Britain.  What this change allows for, is that it gives Tommy Robinson a platform which is supported by the government and by sell out Muslims such as Dr. Usama Hasan. He hasn’t changed any of his views, he still intends to fight against Muslims and he still intends to criticise Muslims for the mere fact that they follow Islam and now he isn’t doing so with a gang of drunkards, he’s doing so in a suit and tie, with an organization that will present him as an educated individual whose societal and cultural beliefs must be taken as serious intellectual study.

This jump from the EDL to the Qulliam Foundation is not something to celebrate, but it should be seen for what it is, an attempt to make the violent views of Tommy and his friends, seem as respected social commentary.