As it is Easter, I thought I’d just do a quick write up on why the Christian onto-theological model of God does not find much mileage in Islam. One of the classic go-to arguments by our Christian brothers and sisters is to argue that only the human nature suffered, not the divine nature. The reason this is argued is to circumvent the law of non-contradiction. What is the law of non-contradiction?

A cannot be A and not-A at the same time.

To circumvent this, we are told Jesus has two natures, so he suffered in one nature (the human nature or A) and didn’t suffer in another nature (the divine nature or B). On the surface this may seem like a reasonable response, until you break it down into notation form:

In other words, Jesus, the 2nd Person of the Trinity and therefore God, can be said to have suffered, to say otherwise is to deny the personhood of Jesus in totality as the Trinitarian schema is presented to us. Calvinists in particular are fond of this argument but as RC Sproul has noted, other Christians accuse them of being Nestorians by dividing Jesus into two persons, a human person and a divine person. Those who argue in the form that Calvinists and most other popular Christian speakers do, fall prey to being declared apostates:as per the Council of Ephesus (431 CE):

If anyone distributes between the two persons or hypostases the expressions used either in the gospels or in the apostolic writings, whether they are used by the holy writers of Christ or by him about himself, and ascribes some to him as to a man, thought of separately from the Word from God, and others, as befitting God, to him as to the Word from God the Father, let him be anathema.

We can abstract this ontological model even further:

In this rendition, we can also say the Divine Being also suffered, as we are told each member of the Godhead is fully divine. Meme-ified we see: 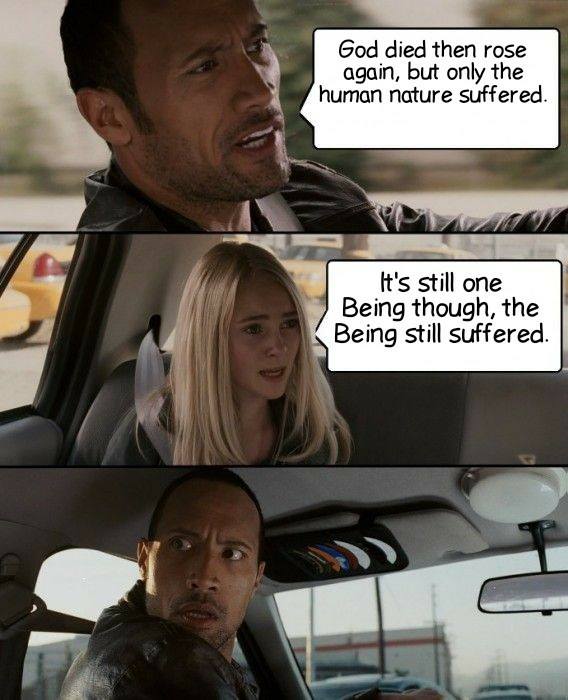