Posted on September 30, 2016 by Ijaz Ahmad Leave a comment

In the days following the announcement by Nabeel Qureishi about his illness (stomach cancer), this is how the Muslim apologetics world reacted:

That’s a video with hundreds of positive comments and about 18,000 views (and growing). Prayers, well wishing and general reflection on the state of apologetics. Yet, many of us were shocked to see Jonathan McLatchie’s reaction to the news. On the Dividing Line program, several of our names were mentioned, including Br. Yahya, myself and a few others. We took no note of it, there was nothing there that needed to be celebrated. It was a somber time, not a time for “scoring points” against each other or trying to use Nabeel’s illness as a means of “getting mentioned” on social media.

Yet, in the days following Nabeel’s news, there was one person. A notorious individual, universally disliked in Hyde Park, and who has been rebuked several times in person in Newcastle itself whenever he tries to bully the Muslims doing da’wah there; who found a reason to use Nabeel’s illness as a means of promoting himself.

It’s uncouth enough to like such a narcissistic post in the first place, starstruck, really? How obsessive can one be about one’s self? Yet, during this obscene display of self conceitedness, while the rest of us were busy sending well wishes to Nabeel, our friend Jonathan McLatchie found himself counting how many times he was mentioned on the Dividing Line. What kind of person counts how many times their name is mentioned in a video? Well it’s the same kind of person who thinks it’s a good idea to promote themselves by posting 10 photos of themselves just talking to someone else.

I get that he might like Jay, I understand that he may like taking a picture or two of himself, but what kind of individual who abuses debate opponents post-debate and lies about attendance numbers, behaves like this? 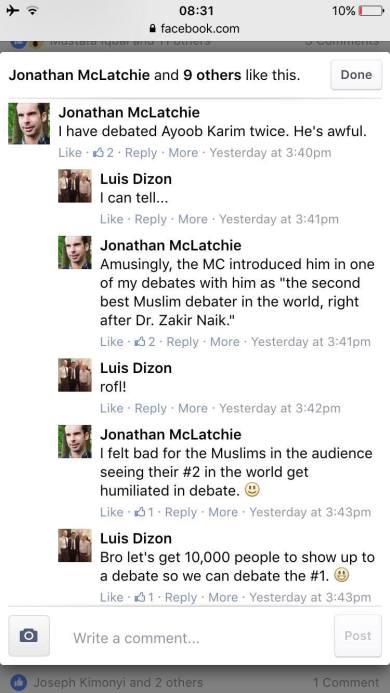 Jonathan McLatchie is that kind of person, and that is why we in apologetics cannot take him seriously any longer.