Posted on September 30, 2016 by Ijaz Ahmad Leave a comment

Once again, we find ourselves appalled at the behaviour of Jonathan McLatchie. After mocking my illness and wishing ill upon me, I continued to dialogue with him despite his negative disposition towards me. Today we had a chat that quite upset him. I questioned his dislike for the scholar Candida Moss, he asked me a question about his behaviour and when I answered his question, he once again chose to block me.

This is the same person, who on the very day after Nabeel Qureishi made public his illness with stomach cancer, found himself on Facebook concerned with how many times Dr. James White had mentioned his name on the Dividing Line. He was much more concerned with the number of how many times his name was mentioned, while the inter-faith scene was upset with the news of Nabeel’s illness. 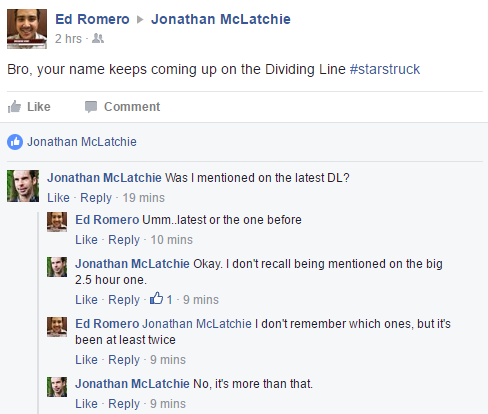 Truly, I am tired of having to receive messages from both Christians and Muslims that have been abused by Jonathan. 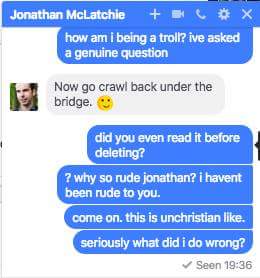 There are a lot more messages like this from Jonathan and his 15 year old friend, who both have been rebuked for their abusive and intolerant behaviour online.