Professor Larycia Hawkins was suspended from teaching at Wheaton College for wearing a cloth head covering. In an attempt to justify this decision, the College stated:

“While Islam and Christianity are both monotheistic, we believe there are fundamental differences between the two faiths, including what they teach about God’s revelation to humanity, the nature of God, the path to salvation and the life of prayer,” Wheaton College said in a statement.

“Wheaton College faculty and staff make a commitment to accept and model our institution’s faith foundations with integrity, compassion and theological clarity,” the college said in a statement. “As they participate in various causes, it is essential that faculty and staff engage in and speak about public issues in ways that faithfully represent the college’s evangelical Statement of Faith.” – Chicago Tribune.

That is why a wife ought to have a symbol of authority on her head, because of the angels. – 1 Corinthians 11:10.

It was the common usage of the churches, for women to appear in public assemblies, and join in public worship, veiled; and it was right that they should do so.

Gill’s Exposition of the Bible says about this verse:

The Greek word more properly signifies the power she had of putting on and off her covering as she pleased, according as times, places, and persons; made it necessary…

Women have the power, as given to them by God, to put on or take off a 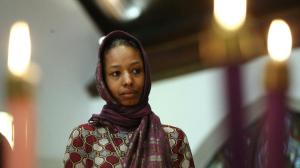 veil according to the aforementioned commentary. Thus, it is quite damning that a Christian College would find it necessary to condemn, reproach and suspend a Christian woman because she wore a veil, a piece of cloth on her head. The question needs to be asked, if educated Christians from a Christian College  are so insecure about a woman’s wearing of a piece of cloth on her head, does this reaction from the College indicate the level of prejudice and xenophobia Christians hold towards Muslims?