The latest critical edition of the Greek New Testament is to be released sometime between the months of May and June of this year (2014). Critical Editions (Editio Critica Maior) of the New Testament text refers to the Greek text which is most likely representative of the original (autograph) version from which all other copies (manuscripts) were made (archetypal text) based on the surviving (extant) manuscripts. 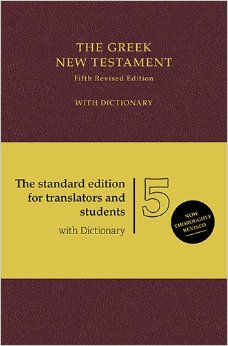 When Greek New Testament scholars sometimes state that the New Testament is 99% certain, what they mean is that based on the current manuscripts, they have decided that out of all the varying readings that this one specific reading is probably more accurate than the other readings contained in the remaining manuscripts. In other words, they are 99% certain that one variant is more accurate than another variant. This belief however, stems from the Evangelical Greek scholars, their level of certainty differs vastly with the scholars of the Nestle-Aland and UBS committees. There is a persistent need for clarification and correction purposes as Evangelicals seem to misunderstand what the editions represent. The Critical Edition of the New Testament is meant to envision what the original may have looked like, based on the manuscripts which have existed to this day, and out of those manuscripts – the specific readings chosen out of the thousands of other variants, is 99% more correct than the other variants. It does not mean that the current Greek New Testament is 99% certain or representative of what may have existed during the 1st century CE. It’s 99% certainty in the choice of the variants, above the other variants. This disparity in understanding, is sometimes extremely difficult for polemicists and lay Christians to understand, which is problematic for them as it wholly misrepresents what the Critical Editions are meant to convey.

I previously mentioned that there was a classification criteria which the scholars apply to the Critical Editions, the criteria for the UBS3 and UBS4 Editions is as follows (“The Greek New Testament”, fourth revision edition, Stuttgart: Deutsche Biblegesellschaft, 1994, p.3):

The ratings are as follows (E.J. Edwards, “On Using the Textual Apparatus of the UBS Greek New Testament”, in The Bible Translator, 28, p.122):

This would mean, that out of the thousands of variant readings, when the Greek New Testament scholars decided upon one specific reading they were 59%  greatly uncertain about their choices. In other words, those who claim that Greek scholars are 99% certain in their choice of variant readings are grossly wrong. Merely 8.7% of those choices were certain and 32.3% almost certain. This understanding sometimes goes over the heads of the Evangelical inerrantists which leads to false beliefs about the preservation and accuracy of the modern Biblical text. When changes are made to these two Critical Editions, new translations of the New Testament are produced based on these changes. It therefore should be noted, that the Greek New Testament is constantly being updated, it is primarily a dynamic text which continues to evolve time and time again. Those who believe that the New Testament is absolute in what it expresses clearly do not understand that the very Bibles in their hands are very different from the earlier editions of the Bible.

They sometimes state during their proselytizing that although there are new and varying translations of the New Testament, the Greek Text is absolute and certain, they postulate that the varying and new translations are solely meant to make it easier for non-Greek speakers to understand. Clearly, they are unaware that changes and updates to those translations are as a consequence of the ever changing, constant evolution and development of the Greek New Testament.