So…in an earlier post, I gave the name of the manuscript that contained 1 John 2:22. Despite that, Steven Tilley and his colleague insisted in a video shortly thereafter that we had both made up a manuscript and lied about it’s name. However…using the very name I gave them, word for word, they eventually found that not only was the manuscript not made up but that it was known and documented. Surprising, isn’t it!

You’ll notice that he apologizes for insulting our Br. Yahya, and in some odd way attributes his finding the name of the manuscript to the screenshot of its exact name that I had given. Despite that, he still insists a mistake was made. So to wrap up:

Brilliant to be honest. Now that they realise it exists, hopefully they will learn to behave like adults and act in a mature way. Insulting people, making fun of them, creating videos mocking them because of their inability to find something is not okay, but this is what they are taught at Jonathan McLatchie’s Apologetics Academy.

Missionary Mishap: Literacy is a Problem

Our favourite duo, Steven Tilley and Vladmir Susic made an extremely awkward 8 minute video with a few insults and name calling (something we do not engage in), they should probably read the Gospel where it says to “love your enemy”. At the end of this 8 minute video they had a young missionary “exposing” me (Br. Ijaz), by claiming I had made an error: 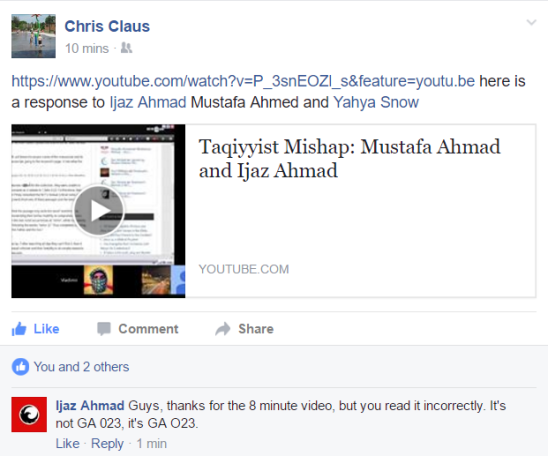 In the video, they premised their claim that we had given them the wrong manuscript name. However, they’ve made quite a simple mistake. They themselves don’t know what the manuscript is called. They first refer to it as “GA zero-two-three” then as, “GA (letter) O 23”. To begin with, the manuscript is not named either. It’s actually entitled, GA Ο23. It’s neither a number (zero) or the letter (o). So, we encourage them to keep trying. Hopefully they’ll figure out the name in the near future. Well, we hope they do before they get the name wrong again.

Recently, following a meeting with a colleague of mines I gave him some manuscript information regarding a passage from 1 John, specifically 1 John 2:22. Following his article, it seems to have caught quite a few internet missionaries off guard, to the point they began to throw insults and mockery, as can be seen here:

Firstly, Steven Tilley spent all day searching for the manuscript I mentioned (GA Ο23 – note, Br. Mustafa has corrected a typo in his article), since he was unable to find it, it meant to him that it did not exist. Not very smart reasoning here. His inability to locate something, does not prove its non-existence. His lack of ability is not an argument against the validity of the source being examined. One of the reasons I gave just one alias of the manuscript was to see how well they were educated and skilled. It would therefore seem that without knowing the other aliases for the manuscript that they can’t find any other information about it. Quite embarrassing to say the least.

Secondly, his colleague, then proceeds to call me an idiot and refers to a Wikipedia page that does not mention the other aliases of the manuscript. In his wisdom, he then claims I pulled the source out of…well, he was trying to throw an insult.

So not only were they not smart enough to find the alternate names for the collection, they were unable to locate the museum data about the collection and its contents as it relates to 1 John 2:22. Furthermore, they would have actually gotten a great deal of information if they consulted the NET’s Textual Critical notes on 1 John 2:22-23 which actually comments on the missing words from one of these passages and the textual tradition which omits them.

To make it even more interesting, it seems as if they think the passage only lacks the word “antichrist” as Steven has argued. This is actually incorrect, thus demonstrating their further inability to comprehend basic textual critical issues. 1 John 2:22 is lacunose between the two initial occurrences of, “εστιν”, while completely omitting the rest of the passage (as found elsewhere) following the words, “εστιν  Ις”. Thus completely omitting, “is the Christ. Such a person is the antichrist–denying the Father and the Son.”

That’s quite a lot more than just the word, “antichrist”.

There’s two other aliases by which the manuscript goes by, if after searching all day they can’t find it, then it goes to show their limited grasp on New Testament textual criticism and their inability to do simple research. All they really had to do was consult Jones’s work on Amulets.

It’s that time of the day again! Steven and Vladmir are friends of Sam Shamoun and Jonathan McLatchie. Most people would remember Vladmir from the several hour videos that him and Jonathan have made for YouTube. In the below discussion, Steven Tilley, a Christian missionary, posts a photo from a book claiming that this shows the Qur’an has been “tampered with”. Changes in the way vowels have been represented is not tampering, but the development of the written text to make it easier to read, in this case, known as orthography. A common example is of “sonne” and “son” (others include “mi” and “my”, “saule” and “soul”, “gode” and “good)”, the way the written language represents the word has changed, but it carries the same pronunciation and the same meaning. Nothing more, nothing less. So, I point this out to Steven. He immediately replies that I’m wrong. Then his friend and colleague, Vladmir comes along to say that I’ll be ripped to shreds by Steven on this topic.

I didn’t recognize the book at first, so I asked him what the name of it was. After a minute of posting that question, I remembered the name and found the book that the photo was taken of. Steven never bothered to let us know the name of the book, and it is most likely he’d never do that for a very good reason. That reason? The very photo he posted was taken from the chapter on….you guessed it…..orthography!

So what does Steven decide to do when he’s been caught lying? Well he apologized, corrected himself and his friend Vladmir did the same. Sorry, I got that wrong, Steven did none of those things and decided to do the following:

After being caught lying, and having quoted a paragraph from the book by Keith Small, literally mentioning the word, “orthographic”, he decides to delete the entire post and pretend like it never happened. Fortunately for Steven and Vladmir, I enjoy conversations like these and knowing that they are influenced by the characters of Sam Shamoun and Jonathan McLatchie, they’d never correct themselves. This once again shows that these missionaries know very little about the topics they “discuss” and it is more about pride than it is about knowing the truth.