Posted on December 9, 2013 by Ijaz Ahmad Leave a comment

I’d like to announce that Ustadh Alie Ataie, whom I personally consider to be the most professional Muslim scholar on Christianity is having a 12 week course on the Gospels for free! This is an unmissable event, he speaks Arabic, Hebrew and Greek, he’s also graduated from a Christian Theological Seminary!

Here’s a little information on him:

Ali Ataie is the President and Founder of Muslim Interfaith Council and has been involved in interfaith activities for over ten years. He earned his undergraduate degree in Accounting from Cal Poly State University in 2000, during which time he served as the 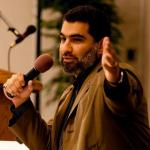 President of the Muslim Students’ Association . He has been both a guest lecturer and guest instructor at several colleges and universities such as Cal Poly State , UC Davis , UC Berkeley, and Cal State East Bay . He studied various Islamic sciences under local Bay Area scholars and has dialogued and debated with several Christian scholars on a variety of topics ranging from the historicity of the resurrection of Christ (upon whom be peace) and the Prophethood of Muhammad (upon whom be peace and blessings). He is a graduate of the Badr Arabic Language Institute in Hadramawt, Yemen and studied at the prestigious Dar al-Mustafa under some of the most eminent scholars in the world. He holds a Masters’ Degree in Biblical Studies from the Graduate Theological Union in Berkeley, (the first Muslim seminarian in the 143 year history of the school to do so), and is working on a PhD in Islamic Biblical Hermeneutics.

Spaces are limited! Very limited, so please ensure you register early. Here’s the breakdown of the course: