The GED “educated” Sam Shamoun, has recently accused Dr. Shabir Ally of being, among other things, a “deceptive”, “dishonest”, “slanderer”, who is a purveyor of, “smoke and mirrors”. He’s dedicated several days to attacking Dr. Shabir Ally for apparently “misquoting” Robert Gundry on Matthew 28:19. The irony of all this, is that Sam is quite desperate to one-up a man that he has been obsessing about for the past decade, after a debate in which Dr. Shabir, to put it lightly, “embarrassed Sam”:

As indicated in Dr. Shabir’s responses to Sam, see Part 1 here, see Part 2 here, Sam had to manufacture quotes and lie about what Dr. Shabir said during the debate, to maintain the illusion that Dr. Shabir “misquoted” anyone. Thus, Sam, has shifted the goalposts from first claiming Dr. Shabir misquoted Gundry, to now claiming he “misrepresented Gundry about the Trinity”. These are two different positions, they are not the same. This is typical of the character of Sam, he’s unable to competently understand his opponents, and spends an inordinate amount of time trying to deflect from his stunted intellectual abilities. One might say that I’m exaggerating, but this is not the case. Sam has done the same to Br. Zakir Hussein. Let’s look at Sam’s inability to read. In an article slandering Br. Zakir, Sam accuses him of lying about a quote from a work by Ostrogorsky, by first stating:

Thirdly, Hussein’s assertion concerning what Ostrogorsky says in his book is a boldfaced lie, since there is nothing about a decisive victory taking place in the year 622 on that page. More importantly, this author emphatically says that the Byzantines defeated and vanquished the Persians in 627-628 AD!

Please note that Sam claims to have read the page, and that the author says “nothing about a decisive victory taking place in the year 622 on that page”. He then proceeded to present the following quote from page 101:

Here is the quote:

“The threatening attitude of the Avar Khan made it essential for the Emperor to return to Constantinople. The tribute paid to the Avars was then raised and near relatives of the Emperor were sent to the Khan as hostages, so that Heraclius was able to resume the war with Persia by March 623. In spite of the defeat of the previous year, Chosroes II REFUSED TO CONSIDER A TRUCE, and he sent the Emperor a letter full of the most insulting expressions and blasphemous utterances against the Christian faith.” 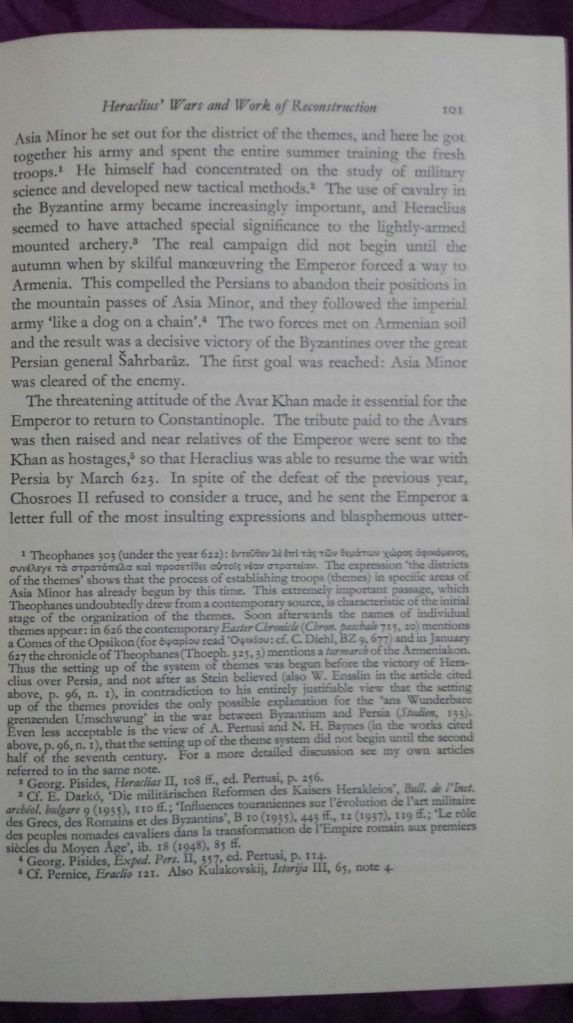 “The two forces met on Armenian soil and the result was a decisive victory of the Byzantines over the great Persian general Sahrbaraz. The first goal was reached: Asia Minor was cleared of the enemy.”

What does this mean? Not only is the quote he claimed on the same page, he has intentionally misquoted the book, by starting his own quotation one line below the relevant quote used by Br. Zakir Hussein! It clearly states that their was indeed a “decisive victory”!

Perhaps though, if Sam had read the very quote he pasted in his article, it speaks about and I quote, “In spite of the defeat of the previous year….”, it really can’t get more obvious than that, does it? The previous year of 623 CE, would be what? (If Sam is reading this, previous means before, so you minus 1 from 623). That would mean 622 CE. What was the defeat in 622 CE? The decisive victory by the Byzantines!

Not only is Sam deceptive for lying about what Dr. Shabir claimed during the debate, and then later shifting the argument to be about a “misrepresentation of Gundry about the Trinity”, when it comes to his own claims, and his own research, Sam is shown to be, in Shamounian terms, quite functionally illiterate.

Sam further alleged in an article, that Dr. Ally needed to be “exposed” and put to shame as a person notorious for “misquoting and mishandling scholars”. Given that Sam has been refuted en toto by Dr. Shabir Ally, and that Sam in this article, has been shown to be notorious of misquoting and mishandling scholars, shouldn’t he then expose and put himself to shame? Perhaps then, this is a case of irony. If Sam spent less time feeding his ego and his stomach, maybe he’d have the cognitive capacity to recognize that attacking people more intelligent than himself is a bad move.