Jay Smith concedes he isn’t familiar with the sources used

Recently Jay Smith sent an email lauding himself for referencing scholars and scholastic work he has not read nor has he studied. He claims in his email:

Dr. Gordon Nickels helped me (via skype) put together the main body of the material I used before the debate itself.

It thus makes sense that someone else told Jay what to say, without Jay having read or studied any of the materials used in the main body of the debate. This also explains why he refused to reference any of the sources he took his information from. As I’ve explained in my response to him, most of what he says and what the people he refers to says, contradicts. The apparent disconnect between Jay and the studies he refers to now makes sense, as he’d never read them before, he had someone else over Skype give him snippets of information that he was not familiar with. He continued:

I made sure to initially highlight the French scholar Dr. Francois Deroche’s research, coupled with the two leading Turkish scholar’s work on the earliest Qur’anic manuscripts (Dr. Tayyar Altikulac, and Dr. Ekmeleddin Ihsanoglu).

I’m not sure if highlight is the word here to be used. He certainly mentioned Dr. Deroche, but as I’ve explained in my response, what he says of Deroche and what Deroche himself says – wholly contradicts each other. Jay merely referenced a number, 93, without giving Deroche’s explanation but trying to explain it himself, which led to him overstating what Deroche had intended. I’ve referenced the page number and the book where Jay got this number 93 from, but I present the rest of what Deroche says which completely refute’s Jay’s uneducated and baseless statements. One would also notice he mentioned the names of Dr. Tayyar Altikulac, and Dr. Ekmeleddin Ihsanoglu, neither of whom he quotes or refers to again. All he quite literally did was mention their names. So not only has he admitted he got these names over an Evangelical on Skype, he’s also admitted he has no experience with their writings themselves! He continued:

I then introduced Dr. Keith Small’s research concerning his comparisons between the Biblical and Qur’anic manuscripts, and his excellent assessment of the political control in standardizing the Qur’anic text 1-2 centuries after Muhammad.

He keeps using the term introduced and I think this is where he’s being honest. During the debate, you’d notice a very disconcerting pattern. He’d drop a name, explain why the person is important and then proceed to give some snippet of information that he was unfamiliar with and when he expanded on them, began to contradict what the sources themselves had said. Keith Small has already been replied to en masse by scholars and lay men alike. The assertion that the Qur’aan was protected by the Muslim governors and rulers can’t be seen as negative. When the power of the State ensures the validity of the transmission, that in no way can be a negative thing. After all, the State has both the power and the resources to invest in the preservation of such important and sacred documents. Perhaps what is troubling is Jay’s ignorance of New Testament transmission, he claimed during the debate that there was no political power involved in the copying, distribution or preservation of the New Testament. Perhaps he should educate himself, as the Latin Vulgate was produced after Pope Damasus near the end of the 4th century, commissioned Jerome to produce the “best” edition of the New Testament based on the various Latin transmissions of the text during that time. If I cannot expect a man to be honest or to be acquainted with the history of his own text, on what grounds can I expect him to speak truthfully of any other religion’s? He continued:

I also introduced Dr. Andy Bannister’s Formulaic material, pointing out the many instances in the Qur’an where Jewish formulaic apocryphal writings were borrowed.

I think it’s fairly easy to understand that if God sent a message before and He reiterated that message again in another revelation, we’d expect it to say something similar, or repeat the same thing again. I am familiar with Andy’s work, and to be honest, all the poor guy’s done is taken the claim that the Qur’aan is based on Jewish and Gnostic apocryphal writings and stated they have similar words between them. It does not take a genius to make the connection that if two statements convey the same message, they’re going to contain similar terms. It’s one thing to claim though that the Qur’aan literally took from those sources, as opposed to explaining how an Arab had access to lost apocryphal literature in a language he, neither his people can speak or have since been able to speak. It’s a nice conspiracy theory, but on the grounds of objective academic and scholastic work, it’s mere polemics. Dr. Shabir does speak at length about Bannister’s claims and opinions in this recent video. Jay continued:

But most of my time was spent introducing Dr. Dan Brubaker’s new research on the hundreds of variants (up to 800) which he found in the 10 Manuscripts he researched, some written as late as the 9th century. Earlier this month I had spent a day with him at his home, and he let me use pictures from his doctoral thesis to underline the 6 forms of consonantal corrections he found in these manuscripts. So, our best evangelical scholars in this field were well represented in my presentation.

This is perhaps where it gets to be quite interesting. Dan only let Jay take pictures. I own and currently posses the entirety of Dan’s thesis. So while Jay’s arguments are based on photos he took, I have the entirety of Dan’s work and I’ve actually read it. All 45 mb’s of it. So thus far, Jay’s information has been from a Skype conversation on works he does not own and has never read, along with a thesis he took photos from and hasn’t read. Can this get any worse? Yes, it’s Jay Smith, it can get worse.

It was the variants in the manuscripts which pointed to a later standardization of the Qur’an after the 8th century which seemed to especially cause a problem with the Muslims who were present, or were watching, and for good reason. With this evidence Muslims will no longer be able to simply say, as they so often do, that their Qur’an is 1) eternal, 2) sent down 3) complete, and 4) unchanged. Now they will have to prove it, and you can see just how difficult that is now going to be.

The problem is, that nothing Jay stated in the debate is contained within the works of the people he has name dropped. I know full well that Jay has been informed of my response to him, since then, my indication of his errors and mistakes were used in a sit down in which he was unfortunately unable to defend himself and his academic dishonesty. We can say as Muslims with confidence that the Qur’aan was standardized in the 7th century CE, with the orthography as we read today developing further in each century. With the extant evidences we posses, we can say with certainty that the Qur’aan is eternal, sent down, complete and unchanged. We have proved it and I’ve used Jay’s own sources to do so in my draft response to him.

What have we learned? We now have an explanation as to why Jay’s statements in the debate, contradict the works and people he appealed to. This is because he has neither studied those works or read them, instead as he admits, this information was provided to him via a Skype conversation and as he further claimed, this information was taken from a thesis he took a few photos of without having studied or read it, a thesis which I own and posses completely. Have some fun with Jay, demand that he explain his errors and mistakes, his deceits and lies as documented in this article by me.

I found this to be quite funny, a Christian on Facebook seemed to be a bit too enthusiastic about the rapture and decided it was just about to happen, as if it were moments away. Sadly, it’s been posted since lunch time and it’s around night time now, I don’t have the heart to tell this guy that the rapture isn’t going to happen tonight. Would anyone like to do it? 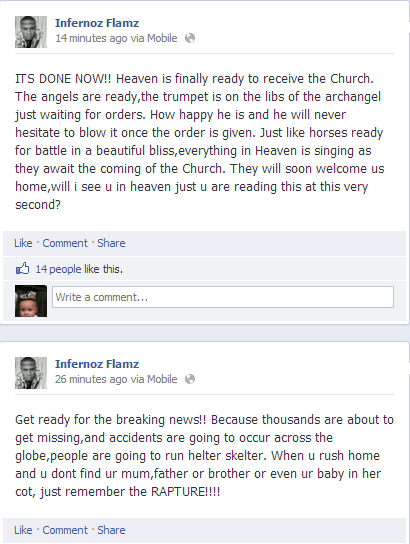 I almost feel sort of embarrassed for the guy! Then I remembered he was a Christian and the only way he gets through life is to believe the rapture is imminently upon us. Unfortunately, most Christians who are over excessive in their excitement of the rapture fit into the mould of those who forget that no one knows when it is going to happen, not even Jesus knew. It must be depressing to wake up everyday and believe that the rapture is going to happen and going to bed knowing it hasn’t.