Edit: Delayed to 14th or 15th due to unforeseen circumstances.

My paper critiquing Jay Smith’s allegations and claims in his recent debate with Dr. Shabir Ally, entitled, “The Bible or the Qur’an: Which is the Word of God?“, will be published tomorrow via a PDF on both Scribd and Google Drive. I cannot at this moment give a specific time when the paper would be published, but barring any sudden and unexpected incidents I expect it to be published during the course of tomorrow. At present, the only hindrance to the publishing of the document would be a translation I’m awaiting of a French work that is otherwise not available in English. Considering the inclusion of the French quote’s data as a peripheral to the cause of the paper, when it is made available to me, I shall append it in due course. Following the publishing of my paper, another paper by another Muslim speaker would be subsequently published on a similar theme but more in depth concerning a specific work referenced during the debate. While my response is a point by point rebuttal to Jay’s allegations, this coming work is an overtly critical analysis of an academic work that was mentioned but not really used during the debate. I have not worked in conjunction with this other Muslim speaker, but we have exchanged sources during the course of our writing.

Perhaps what is most interesting is the silly claim that because I have not published any works on this site which include the literature of Deroche or Walid Saleh, it then means that I did not know of them before the debate with Jay hence the lengthy duration of time it took for me to prepare the paper. The assumption or rather the assertion is that I was unfamiliar with their works completely. This is an absurdly baseless allegation. There are many works I read on a daily basis which I do not quote or reference on this site or in my debates, but of which I post to my private Facebook account or which I use in personal correspondence in response to questions. Case in point, I have dug through my personal Facebook timeline, to dig up this post by me on August 4th, 2014: 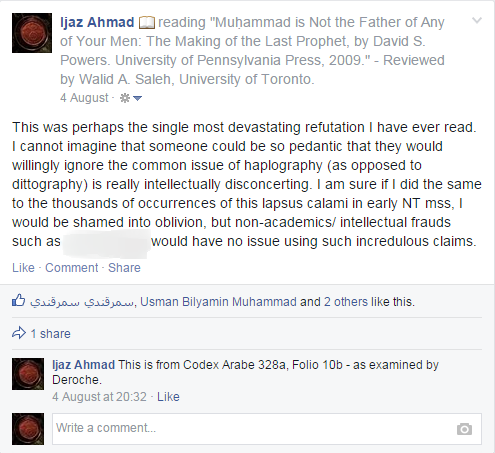 This is one of the many examples on which I’ve commented on either of these men’s works. I’ve blurred out the name of the evangelical missionary apologist I was condemning in this post which in retrospect was unfair of me and not of proper decorum. For those who are my Facebook friend, you’d be able to see this post on my timeline which I’ve re-posted today so that we all can access it in an easy manner. I have stated before and I will state this again, the only impediment in regard to my writing of the paper has been my health which has been on a steady decline for some two years now via a chronic illness to which no medical institution has been able to adequately decipher. A state of health which most missionaries and apologists are well aware of. Following the publishing of the paper, a video response will accompany it in the coming weeks which at this time I cannot give a definitive date for.

Debate: Which is the Word of God – Dr. Shabir vs Jay Smith [Today, Live Stream]

Posted on September 27, 2014 by Ijaz Ahmad Leave a comment

Dr. Shabir faces off against Jay Smith on a popular topic: “The Bible or the Qur’aan: Which is the Word of God“. Hosted by E&AM in Toronto, Ontario (Canada). It’s roughly 14 hours from the time of this post. You can check the Facebook Event Page here. Times for New York, London, Trinidad, Toronto, LA and Mumbai are listed below.

Times for Saturday 27th for all locations except India below:

If your time zone is not listed above, check World Time Buddy and search for your city, followed by choosing 2:30 PM as the time in Toronto for a quick and easy conversion. If you are still uncertain about the time for the start of the event, click the Live Stream’s link below and there is a timer counting down to the start of the event.