Most people are aware that Tom Holland is a historian, most people are also aware that he is not a palaeographer, nor a papyrologist, nor has he studied Arabic codicology. Therefore, finding him being referenced as an academic source regarding the Birmingham manuscripts was extremely strange. I decided to tweet Tom and get some answers. 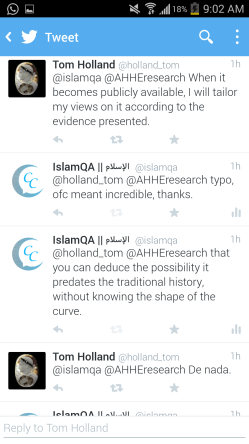 So what have we learned? Tom Holland is not a specialist in this field. He did not consult any actual data to arrive at his publicly claimed conclusions. He is not aware of how manuscripts are carbon dated, nor is he aware of modern studies on Arabic palaeography and codicology. In other words, his opinion is akin to asking any random person off of the street to give their analysis of highly specialized scientific data.

Interestingly in July of this year, Tom actually held the opposite view, that the manuscripts validated the traditional teaching about its codification:

Tom Holland, the author of “In the Shadow of the Sword,” which charts the origins of Islam, said the discovery in Birmingham bolstered scholarly conclusions that the Quran attained something close to its final form during Muhammad’s lifetime. He said the fragments did not resolve the controversial questions of where, why and how the manuscript was compiled, or how its various suras, or chapters, came to be combined in a single volume. – NYT.

You can read the full conversation on Twitter, here. As we say in cricket, Tom, learn to bat in your own crease.