The Gnostic Sources of the Gospel of John

One of the most important books ever written on the Gospel of John, is the Commentary by Rudolf Bultmann. I’ve taken the liberty of transcribing some of his quotes, they are as follows: 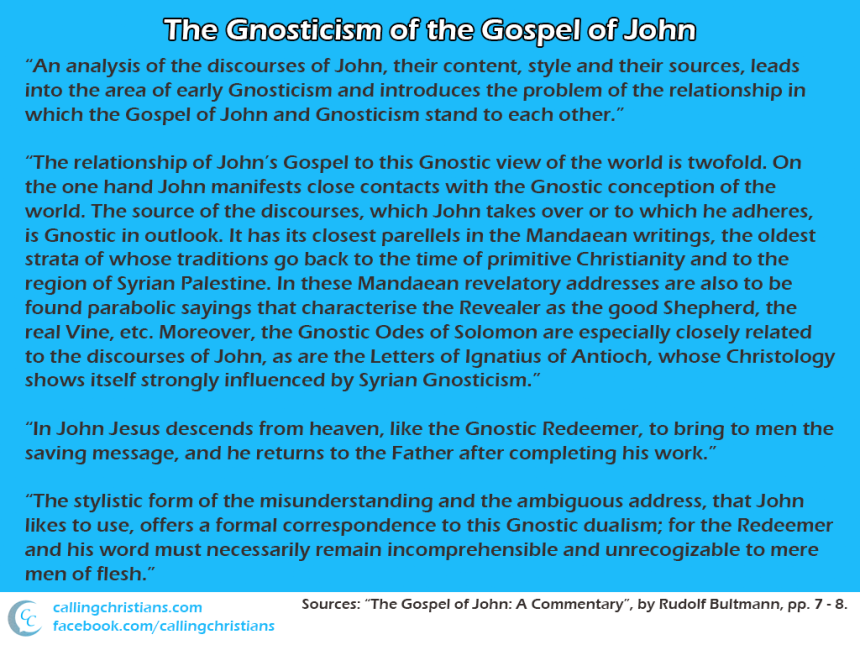 Summarily, he’s arguing that the Gospel of John borrows a lot of Gnostic ideas, beliefs and terminologies. The Manadaeans are described as follows in the Catholic Encyclopedia:

Manichæism is a religion founded by the Persian Mani in the latter half of the third century. It purported to be the true synthesis of all the religious systems then known, and actually consisted of Zoroastrian Dualism, Babylonian folklore, Buddhist ethics, and some small and superficial, additions of Christian elements. As the theory of two eternal principles, good and evil, is predominant in this fusion of ideas and gives color to the whole, Manichæism is classified as a form of religious Dualism. It spread with extraordinary rapidity in both East and West and maintained a sporadic and intermittent existence in the West (Africa, Spain, France, North Italy, the Balkans) for a thousand years, but it flourished mainly in the land of its birth, (Mesopotamia, Babylonia, Turkestan) and even further East in Northern India, Western China, and Tibet, where, c. A.D. 1000, the bulk of the population professed its tenets and where it died out at an uncertain date.

Mandæan (mndaya) is a Babylonian-Aramaic word in dialectic form, meaning: Gnostics, gnostikoí, “those who are good at knowing”. The Hebrew for knowledge md‘ Madda is of the same root and is the noun from which the adjective Mandaya is derived. It is the name adopted by the sect itself, being employed in their sacred books, and is characteristic of their worship of the mnds dhya gnôsis tês doês or “knowledge of life”. Another name also found in their sacred books is that of Sabians (sbya) which means Baptists (sb‘ to baptize in Syriac and Aramaic).

Alternatively, they can be read about in the Encyclopedia Britannica. He presents numerous examples of the resemblance between this pre-Christian religion and early Greek-Christian beliefs found in the Gospel of John and in the writings of the early Patristics (Church Fathers). It is quite apparent that the early Greek Christians borrowed heavily from this pagan religion. Ironically, Christians have for centuries demonized Gnosticism without realising how similar their beliefs truly are. In most of my writings I have consistently referred to Christianity as Graeco-Roman Jewish Syncretism. This belief of mine is shared by many Christian scholars and is known as the Bauer Hypothesis.

This hypothesis holds to the view that early Christianity existed as a plurality of various forms of early Messianic Jewish syncretism with the prevailing religious cultural and spiritual traditions of the varying locales contemporary to the 1st century CE. If you’d like to see more of what Rudolf Bultmann says on the Gospel of John and its borrowing from pre-Christian religions, leave a comment below or share this post on Facebook and other social media websites.