It is common knowledge or should be common knowledge that Paul’s former name was Saul. Being a Jew, Paul had a Jewish name before his conversion. The day Saul changed his name to Paul is quite peculiar, if not outright absurd to say the least. In the 13th Chapter of Acts, many strange incidents occurred:

They traveled through the whole island until they came to Paphos. There they met a Jewish sorcerer and false 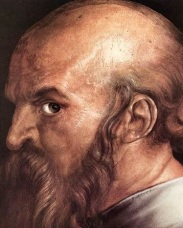 prophet named Bar-Jesus,  who was an attendant of the proconsul, Sergius Paulus. The proconsul, an intelligent man, sent for Barnabas and Saul because he wanted to hear the word of God. But Elymas the sorcerer (for that is what his name means) opposed them and tried to turn the proconsul from the faith. Then Saul, who was also called Paul, filled with the Holy Spirit, looked straight at Elymas and said,  “You are a child of the devil and an enemy of everything that is right! You are full of all kinds of deceit and trickery. Will you never stop perverting the right ways of the Lord?

As it turns out Saul met the son of Jesus (Bar-Jesus) and Sergius Paulus. What happens next is quite unbelievable. After Saul meets Sergius Paulus, Saul’s name is then introduced in Acts as being Paul. Let’s break this down for some understanding:

Strong’s Greek Lexicon, comments on the name of “Paul” by saying:

Paul or Paulus = “small or little”

According to famed Christian scholar and exegete, Adam Clarke, he says:

This is the first time the name Paul occurs, and the last time in which this apostle is called Saul, as his common or general name.

Another famed exegete, James Coffman of the Coffman Commentaries on the Bible, in his exposition of Acts 13:9, quotes J.W. Conybear’s analysis of the verse and makes the following comment:

Conybeare said, “We cannot believe it accidental that the words `who is also called Paul’ occur at this particular point.” He made the deduction that the conversion of Sergius Paulus brought the name Paul to the surface and precipitated the use of it.

Therefore, our conclusion has to be that Paul copied the name of Sergius Paulus, as the coincidences are too great and obvious, to simply be a name that Saul assumed for himself. As such, even Christian scholars such as J.W. Conybeare and John Gill (as quoted above) admit that Saul’s usage of the name Paul is due to his meeting with Roman General, Sergius Paulus. What are we supposed to understand from Paul’s stealing of another person’s name, especially of a man who had a Jewish magician/ sorcerer as his aide and teacher:

The fact of Bar-Jesus’ having been a Jew suggests that Sergius Paulus had made inquiry into the beliefs of the Jews and may therefore be presumed to have had some knowledge of the sacred Scriptures. As MacGreggor admitted, “there would be nothing extraordinary in a Roman official having a Jewish teacher in his house.” – Ibid.

This concession by Christian scholarship casts a shady aura upon Paul, sorry, Saul of Tarsus. For what reason he copied the person’s name, or began using it exclusively after meeting his namesake, is unknown, but most interesting indeed.