Posted on February 11, 2013 by Ijaz Ahmad Leave a comment 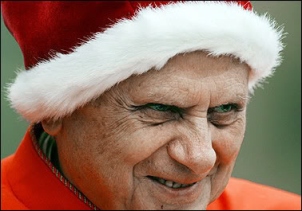 In light of the Pope’s resignation of being Christ’s representative in earth, a first in over 600 years, an article by the recently deceased Christopher Hitchens comes to mind. In 2010 when the growing public outrage at the Pope’s blatant ineptitude to deal with the rising sexual abuse/ assault cases came to never before seen heights, then writer for SLATE.COM, journalist Christopher Hitchens wrote an extensive piece on the moral decadence and evil as has been perpetrated by Pope Benedict. You can read the full article here and some interesting quotes below:

On March 10, the chief exorcist of the Vatican, the Rev. Gabriele Amorth (who has held this demanding post for 25 years), was quoted assaying that “the Devil is at work inside the Vatican,” and that “when one speaks of ‘the smoke of Satan’ in the holy rooms, it is all true—including these latest stories of violence and pedophilia.” This can perhaps be taken as confirmation that something horrible has indeed been going on in the holy precincts, though most inquiries show it to have a perfectly good material explanation.

Concerning the most recent revelations about the steady complicity of the Vatican in the ongoing—indeed endless—scandal of child rape, a few days later a spokesman for the Holy See made a concession in the guise of a denial. It was clear, said the Rev. Federico Lombardi, that an attempt was being made “to find elements to involve the Holy Father personally in issues of abuse.” He stupidly went on to say that “those efforts have failed.”

This is common or garden stuff, very familiar to American and Australian and Irish Catholics whose children’s rape and torture, and the cover-up of same by the tactic of moving rapists and torturers from parish to parish, has been painstakingly and comprehensively exposed. It’s on a level with the recent belated admission by the pope’s brother, Monsignor Georg Ratzinger, that while he knew nothing about sexual assault at the choir school he ran between 1964 and 1994, now that he remembers it, he is sorry for his practice of slapping the boys around.

Not content with shielding its own priests from the law, Ratzinger’s office even wrote its own private statute of limitations. The church’s jurisdiction, claimed Ratzinger, “begins to run from the day when the minor has completed the 18th year of age” and then lasts for 10 more years. Daniel Shea, the attorney for two victims who sued Ratzinger and a church in Texas, correctly describes that latter stipulation as an obstruction of justice. “You can’t investigate a case if you never find out about it. If you can manage to keep it secret for 18 years plus 10, the priest will get away with it.”

While many Catholics will call his resignation, an act of undisputed humility, I think a very important question has been largely ignored. How morally justifiable is it to be God’s representative on earth and then quit that position. If Ratzinger’s issue is his age, then why didn’t Peter, the first alleged Pope not quit when he got old? Why didn’t Pope John Paul quit when he realised he was dying? Either those people who died in their Papacy had no humility or the masses are simply making excuses for what is one of the worst Pope’s the world has ever seen. After all, he screwed up relations with the Muslim world, was an avid and proactive member of the Hitler Youth, and last but not least, failed to manage the greatest scandal to hit the Papacy since its existence, the sex abuse incidents. Clearly he’s left a legacy the Church and Catholic Christians alike, would love to sweep under the rug and move on. Can’t blame them.